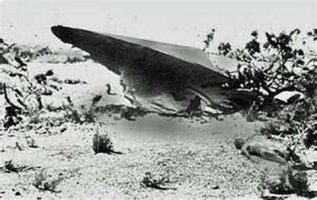 Yet despite these strong credentials there are some remarkable errors in the text. Corso makes reference to forming plans in 1961 for himself and General Arthur Trudeau to visit the famous mathematician John Von Neuman. Yet Neuman had died on 8th February 1957. Corso also confuses the Northrop B-2 with the Lockheed B-2 Stealth Bomber. Corso also states in the book "early failures to lift off the navy's WAC Corporal and the Army Redstone had made laughing stocks out of the American rocket program." Yet the WAC Corporal was an Army not a Navy missile project and the Redstone rocket never failed. These errors take the shine off this remarkable book, however it has been suggested that such obvious errors - and they are TOO obvious - give the book a degree of plausible deniability. There is an interesting anecdote regarding the forward written by Senator Thurmond which was discussed when Corso was interviewed by Michael Lindemann of CNI News on 5th July 1997 at Roswell.

ML: What about the problem with Senator Strom Thurmond's foreword to your book? Simon and Schuster [publisher] has issued a bland apology, saying that they're going to pull Thurmond's foreword out of future printings of the book. What was your understanding with the Senator?

PC: I've known Strom Thurmond for almost a lifetime. We've always been pretty close. I found out recently that his staff did it. I discussed UFOs with him. I gave him a copy of Project Horizon. About a week later, not only did I get the two pages that are in the book, but I also got a note from him authorising Simon and Schuster to print it. Bill Birnes [co-author of the book] has all that.

ML: Bill Birnes told me when I arrived here today that he was under the impression that Thurmond or perhaps his staff had been pressured from higher up to back out of this. Can you say anything about this?

[Colonel Corso's son, present during the whole interview, made very visible hand signals to the Colonel at this point indicating that the Colonel should not answer this question.]

PC: I can't verify that one way or another.

ML: Forgive me, Colonel, if I ask Mr Birnes to say something about this. [Birnes was in the room embroiled in a side conversation at this time.] Bill, the Colonel has just declined to address the question whether or not Senator Thurmond or his staff may have been pressured from higher up. You indicated that he might have been. Can you explain?

BB: This is just my understanding of it from stories I heard ... one of the staff members said "don't you understand that the Senator cannot be on a book cover, writing a foreword for a book that says the United States government utilised alien technology to win the Cold War? Don't you realise this man is fourth in line to succeed the President? Don't you know this man is chairman of the Armed Services Committee? No, it can't be." So they went to Simon and Schuster and said, "You have to pull the cover. Take it off the shelves, get the foreword out, write a new cover." Simon and Schuster said absolutely not. Then they made it very clear to Simon and Schuster, saying, "you're part of a large conglomerate. Your large conglomerate has to deal with government regulatory bodies. Do you really want to be in this position?"

These errors have led some sceptics to turn on Corso and attempt to discredit the entire book. However, it is probably reasonable to expect some factual errors to creep in thirty years after the event of who worked where, dates, times etc. However, the major feature of the book that Corso saw an alien and headed up a department that reverse engineered alien technology is something unlikely to become confused in time. It either happened or it did not. To confirm that it did happen, Corso stood up to his critics and initiated a court action to acquire military records to support claims made in his book. To this end he signed an affidavit (the signing of which could have left him open to charges of perjury if his claims were found to be false) which read as follows (the defendant was the US Army): [Appendix 3]

"I, Col. Philip J. Corso, (Ret.) do hereby swear, under the penalties of perjury, that the following statements are true: That at all times hereinafter mentioned, I was a member and officer of the defendant. That during my tenure with the defendant I was a member of President Eisenhower's National Security Council and former head of the foreign Technology Desk at defendant's Research & Development department. That on or about July 6, 1947, while stationed at Fort Riley, Kansas, I personally observed a four-foot non-human creature with bizarre-looking four fingered hands, thin legs and feet, and an oversized incandescent light bulb-shaped head. The eye sockets were oversized and almond shaped and pointed down to its tiny nose. The creature's skull was overgrown to the point where all its facial features were arranged frontally, occupying only a small circle on the lower part of the head. There were no eyebrows or any indications of facial hair. The creature had only a tiny flat slit for a mouth and it was completely closed, resembling more of a crease or indentation between the nose and the bottom of the chinless skull than a fully functioning orifice. Then in 1961, I came into the possession of what I refer to as the 'Roswell File'. This file contained field reports, medical autopsy reports and technological debris from the crash of an extraterrestrial vehicle in Roswell, New Mexico in 1947. That I have personally read the medical autopsy reports which refer to the autopsy of the previously described creature that I saw in 1947 at Fort Riley, Kansas. That said autopsy reports indicated the autopsy was performed at Walter Reed Hospital, which was under the authority of the defendant at the time of the autopsy. That said autopsy report referred to the creature as an 'extraterrestrial biological entity.' [Signed] Colonel Philip J Corso (ret.)"

Attorney Peter Gersten, head of CAUS (Citizens against UFO Secrecy) prepared to represent Corso in the court action, having an established track record with Freedom Of Information enquiries. The scene was then set: a former senior military officer who was prepared to swear on oath to what he had seen and the nature of his former work, and the might of the US government and military. Truth was the victim as Corso was dead within weeks; having suffered a massive heart attack on 9th June 1998. He was buried in a military cemetery near Orlando, Florida. Truth has often been a victim. Although over the years a number of individuals with impressive credentials have come forward with information that throws light on what was really going on behind the scenes since World War II, even more individuals with less credibility and some with mischievous intentions have also stepped forward and promoted themselves as harvesters of the truth.

These fraudsters have captured the headlines and have been used effectively by those involved in the suppression of genuine information to camouflage and distract attention away from facts that can only serve to embarrass and undermine political and social infrastructures. Of course, most of the significant events occurred over half a century ago, and as such the opportunity to scrutinise and cross-examine witnesses is now becoming lost forever. As Dr Edgar Mitchell commented at a conference in October 1997: "... in our briefing of the Joint Chiefs of Staff Intelligence Group, it became very clear to us that they were naive. They did not really know any more about this effort than we do, if as much. That is because, as Bob Dean pointed out earlier, most of the people in government were not in government when I retired twenty five years ago, they are younger people. The files going back fifty years just no longer exist. They've either been purged, compromised or whatever.

"They don't exist. So when we blame government for not being forthright, they really don't have anything to be forthright about, at least on that level. Now, somewhere there's knowledgeable people ... and in my own efforts in talking with these folks, and talking with government, the question often comes up as to how they could have kept this a secret for so long. And friends they haven't. It's been around us all the time, but it has been denied, and obscured ... There's been a massive effort at creating that, of denying the obvious, of saying that you're not seeing what sitting right in front of you right now, thus causing doubt in your own mind. It's amazingly effective. So documentation and evidence, that is probably the smoking gun type of evidence, has been totally compromised by saying that it's simply not true. So it is not true that they [government] have kept the secret. They haven't kept the secret, but it has been totally compromised by misinformation and disinformation."