Mysteries of the World 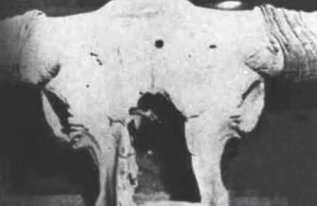 It has been suggested that the hole could only have been created by a projectile travelling at a very high speed, and the only natural phenomena that could account for the size and speed would be a small meteorite. Yet such a meteorite would have burnt up long before hitting the ground. Logically therefore, whatever caused the hole must have been artificial in construction. Given our accepted world history, it is impossible that something artificial could have breached the animal's skull several thousands of years ago. Therefore, there must be a third explanation and the only one would appear to be that, for whatever reason, the skull of the now extinct animal was discovered and injured within last few hundred years.

However, this explanation, however bizarre, cannot be true either, for there is no doubt that the aurochs was alive when its skull was breached; the calcification around the aperture is evidence of that. Indeed, the animal survived the wound and died years later from other causes, leaving a significant puzzle. This discovery of hole in the extinct aurochs is similar to that found in the skull of a 40,000-year-old Neanderthal discovered near Broken Hill in then Rhodesia in 1921. On the left of the skull is a perfectly round hole. There are no radial cracks that would have resulted had the hole been caused by a weapon such as an arrow or a spear. Again, only a high-speed projectile such as a bullet could have caused the aperture.

Indeed, further evidence of the bullet theory comes from the fact that the skull area directly opposite the hole is shattered, having been blown out from the inside. No projectile slower than a bullet could have produced either the neat hole or the shattering effect and a German forensic scientist from Berlin has confirmed that the cranial damage to the skull could not have been caused by anything but a bullet. It could be argued, that someone, for some reason, decided to shoot the skeleton leaving behind only a minor mystery, or, as opposed to the aurochs (which is known to be extinct), the skull is not as old as it is claimed to be. Neanderthal man's skull, however, cannot be easily mistaken for modern man's style, and this skull in particular, has been exhibited at the Museum of Natural History in London, where a mistake is unlikely to have been made. The skeleton was also found 60 feet below the surface; only a period of several thousand years could account for the accumulation of such a deposit.

As with the mysteries detailed in the previous chapter, these puzzles appear out of context with our knowledge of world history, again suggesting that perhaps our history should be rewritten to accommodate all known facts, not just the ones that fit comfortably into our accepted view and understanding. A rewriting of history becomes all the more pressing when we look back beyond the dark-age; for when we do so it suddenly becomes apparent that modern man has only re-created what has gone before and any pride on building a 'sophisticated' world should be replaced with a degree of puzzlement at how we lost our earlier knowledge, skills and technologies. Far from making steady progress, the last 12,600 years actually appears to represent the descent of man.

This can be demonstrated in many ways and should actually come as no surprise for many of the problems we face in organising our lives and society are timeless; they were as pertinent thousands of years ago as they are today. For example, the ancient Romans would change their street arteries to one way during peak traffic hours, and the city of Pompeii used arm-waving traffic policemen to cope with the congestion. Street signs were used in Babylon more than two and a half thousand years before the present, with catchy names such as The Street On Which No Enemy Ever Tread. We now know the ancient city of Antioch was the location of the first street lighting known in history and that the Aztecs set a permanent coloured strip directly into the paved road in order to divide the two lanes of traffic (whilst our roads only have painted lines to achieve the same effect.) 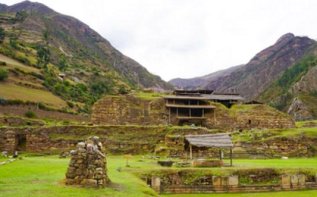 Excavations at Mohenjo Daro, Harappa and Kalibanga in Pakistan and India also show that town planning was in existence 4,500 years ago; the streets of these ancient cities were straight and the blocks rectangular. A complex water supply and drainage system was also discovered. Similarly there is evidence of a complex underwater system in the ancient ruins of Chavin de Huantar high in the Peruvian Andes, dating to 500 BCE. At its peak, Chavin de Huantar (above) covered 105 acres and its population numbered around 3000, an unusually large size for Peru at the time (10). Archaeological constructions of the main ceremonial area of the site show a series of temples that rank amongst the oldest in the world, with one principle temple (11). Under Chavin de Huantar lies a network of finely constructed stone channels that drew water from a nearby river and carried it underneath the site by way of a sophisticated hydraulic system (12). Four thousand years ago wealthy Koreans had Spring Rooms warmed by hot air, which circulated in vents under the floors, and the Romans used a similar design. (Recent central heating was only invented towards the end of the 17th Century by Bonnemain and perfected by Duvoir.)

At the same time in history private toilets with a central system of stone drains and ceramic pipes were common in the city of Knossos, Crete. Similarly the rooms of the Palace of Minos were ventilated through air-shafts. With its air-conditioned chambers, excellent bathrooms and toilets, the palace was not only modern in the way it was equipped, but also very large; similar in size to Buckingham Palace. Pipes for hot and cold water have also been found in tiled bathrooms at Chan Chan in South America a time when such comforts were unheard of in Europe.

Not only did the infrastructure of some buildings compare favourably with modern day equivalents, but also their furnishings: The prehistoric city of Catal Huyuk in Turkey is over 8,500 years old, yet pieces of carpet have been found in the ruins that could compete well with the best woven carpets available today. Such skills were equally evident in a discovery made by Professor Luther S. Cressman of the University of Oregon who came across two hundred pairs of skilfully made woven-fibre sandals in Lamos Cave in east Nevada. When a carbon-14 test was made, the sandals were found to be well over 9000 years old (13).