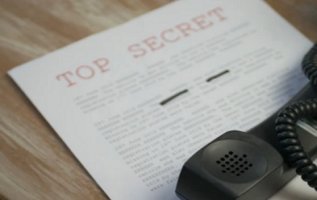 Eventually, and after repeated Court hearings, the NSA was forced to release some of their documents. However of the 582 lines of type so released, 412 had been blacked out by a censor and a further eleven pages of text had disappeared altogether. The reason that the NSA gave for this, however, has legitimacy. Essentially the NSA argued that their work involved intercepting foreign communications. Regardless of the content of the information, disclosure of the records could identify communications that had been successfully intercepted, thus giving foreign intelligence information on which to base countermeasures against the NSA's intelligence gathering techniques. However, it is clear that the NSA had attempted to mislead, as had the CIA, whose position that "The Robertson Panel's Report is the summation of the Agency's interest and involvement in this matter" was severely doubted by researchers.

And these researchers proved to be right. Largely due to the efforts of Todd Zechel together with Bill Spaulding almost 1000 pages of CIA UFO-related documents were released into the public domain in 1978 under the Freedom Of Information Act. (However, it is believed that a further 10,000 documents are still withheld at the CIA's headquarters in Langley, Virginia.) The FBI also proved to be untruthful in their statement that "the investigation of Unidentified Flying Objects is not and never has been a matter that is within the jurisdiction of the FBI." Just three years later, the agency was forced through the courts to release 1,100 pages of UFO related documents dating back to the Second World War. You can almost hear an embarrassed official in court muttering "Oh, you mean those UFO documents."

Yet, although each of the major agencies had covered-up their involvement in the investigation of the UFO phenomenon, the documents they were eventually forced to release appear to show that none of these agencies actually knew what was going on, nor could they account for the range and multitude of sightings of unidentified aerial phenomena. They also show that each major agency didn't even know what each other was up to. For example, on 10th July 1947 a FBI Memorandum from E. G. Fitch to D. M. Ladd, entitled 'Flying Discs' stated "General Schulgen [deputy Chief of Air Intelligence in the Pentagon] assured Mr --------- that there are no War Department or Navy department research projects presently being conducted which could in any way be tied up with the flying disks." This memo ended with a recommendation from its recipient that the FBI not get involved with investigations into 'flying disks', however FBI Director, J. Edgar Hoover, held a different view. In a hand-written note on the bottom of the letter he wrote "I would do it but before agreeing to it we must insist upon full access to discs recovered. For instance in the SW case the Army grabbed it and would not let us have it for cursory examination." Within weeks this certainty became less convincing. A further memo to Ladd dated 8th August 1947 stated "Certainly the Bureau has no way to determine what experiments the Army and Navy were conducting and whether such [flying saucer reports] might be arising out of experiments being conducted by them." Equally unreassuring is that this memo was a reply to a request by the US War Department for the FBI "to conduct investigation to determine the origin of flying discs" (3). They didn't know what was going on either.

Further evidence that each agency did not know what the other was up to was exemplified in another FBI memorandum dated eleven days later on 19th August 1947. This memo read "Special Agent ... of the Liaison Section ... expressed the possibility that flying discs were, in fact, a very highly classified experiment of the Army or Navy. Mr ... was very much surprised when Colonel ... not only agreed that this was a possibility, but confidentially stated that it his personal opinion that such was a possibility ... he based his assumption on the following: He pointed out that when flying objects were reported seen over Sweden, the "high brass" of the War Department exerted tremendous pressure on the Air Forces Intelligence to conduct research and collect information in an effort to identify these sightings. Colonel ... stated that, in contrast to this, we have reported sightings of unknown objects over the United States, and the "high brass" appeared to be totally unconcerned. He indicated that this led him to believe that they knew enough about these objects to express no concern." (4). However, the following month the Air Force appeared to deny that their activities were behind the UFO sightings as a letter from General Schulgen, deputy Chief of Air Intelligence in the Pentagon, to the Director of the FBI dated 5th September confirms:

"In answer to a verbal request of your Mr S. W. Reynolds, a complete survey of research activities discloses that the Army Air Forces has no project with the characteristics similar to those which have been associated with Flying Discs." However, the issue was being taken very seriously and certainly not being dismissed as nonsense as later became official policy as recommended by the Robertson Panel, of which more later.