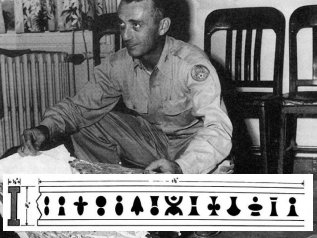 As noted, MJ-12 was established to deal with the aftermath of the crash at Roswell and the ensuing cover-up that took place there. That events there were real has been confirmed by numerous legitimate sources. In 1996 Walter Haut, the former Press Officer at the Airforce base, was interviewed and asked if the debris could actually have been a balloon as claimed. "There's no chance at all. I'd seen them go up over the base - you'd look at them and say 'It's a weather balloon.' Anyone with any experience in the Air Force would be able to tell the difference between a weather balloon and a flying disk. A balloon is a balloon is a balloon!" Haut was then asked if the object could have been from a top-secret project. "I doubt it. Colonel Blanchard would have known about any secret experiments, or at least been told not to panic if anything fell from the sky. Why would he have authorised me to announce the story to the press? It just doesn't make sense." Finally, Haut was asked what he did when he heard about the cover story. "There was nothing I could do. A balloon may have crashed, but it certainly had nothing to do with the downed saucer. What most people don't realise is that back then, you didn't ask questions - you did whatever your superior told you. Today there'd be a lot of questions, or even a Congressional hearing, but it was a different era then." (12)

Major Marcels son, Dr Jesse Marcel M.D., was one of the few people to handle the Roswell debris. He was also interviewed at the same time and recalled "my father was so excited about the debris that he drove by our house to show my mother and myself the material before delivering it to the airbase. There were several boxes of it in our car but we emptied the contents of just one of these boxes on our kitchen floor. "He wanted to see if he could piece some of the fragments together ... There was a lot of metal foil. It looked like aluminium but had a less reflective surface. I didn't try to bend it, nor did I witness the 'metal with a memory' that some have described. I do recall my dad saying a colleague had tried to bend one of the larger pieces with a sledgehammer without even denting it." Marcel continued, "the most striking parts of the material were the beams. The one I remember was about 12 to 18 inches long and was made from a very lightweight material. When I held it up to the light I could see what appeared to be symbols printed or embossed along the length of the beam (above). They looked at first like hieroglyphics, but on closer scrutiny appeared to be geometric designs." Marcel was asked if anyone had pressurised him to keep quiet about the debris. "Only my dad. When he came back from the base, he told my mother and me not to talk about it to anybody, including my friends and any strangers." (13).

That these events were true also appears to be confirmed by an incident that occurred in 1991. In July of that year Marcel was invited to a meeting with Dick D'Amato, national security specialist for Senator Robert Byrd and liaison member of the National Security Council. The meeting took place in the US Capitol Building, Senate Room S-128. "He locked the door in back of us and I thought, gee, I'm in real trouble now. We walked into this room, and on the table was a book about Roswell. As we sat down, he pointed to the book and he says, 'this is not fiction.'" (14) D'Amato acknowledged that there was a crash near Roswell and that aliens were onboard. This was the first time Marcel had heard anyone in government actually admit to the UFO crash. Marcel asked D'Amato where the wreckage was now to which D'Amato answered, "We [the National Security Council] don't know." D'Amato told Marcel that a powerful 'black arm' of government was keeping information a secret and that enormous sums of money were being spent illegally. He added that the National Security Council was trying to find out who these people were and why they were keeping it a secret. (Timothy Good later met up with D'Amato and had the details of this conversation independently confirmed.)

However someone who apparently did know where the wreckage and captured alien(s) were (at least at the time) was one Bob Lazar. He claimed he was employed by the United States Department of Naval Intelligence (with the letters MAJ appearing on his paycheck) in the Nevada Desert in an area known as Area 51.