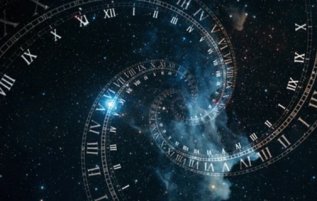 Is there any scientific basis for time travel? According to leading scientists, including now Stephen Hawking there most certainly is. Okay, the next bit becomes a bit confusing, but bear with it if you can. If a pulse of light is emitted at a particular time at a particular point in space, then as time goes on, it will spread out as a sphere of light whose size and position are independent of the speed of the source. After one millionth of a second the light will have spread out to form a sphere with a radius of 300 meters; after two millionths of a second, the radius will be 600 meters and so on. (Somewhat like ripples on a pond spreading out on the water's surface except in three dimensions in four dimensional space-time.)

Now, the figure below shows the light cones associated with three points in space-time, A, B and C. Scientist and author John Gribbin explains. "These points know nothing about each other, and have no influence on each other, because for a signal to get from any of these points to either of the others it would have to pass outside the respective light cones, travelling faster than light. But as time passes, observers that start out at each of these points will follow their own more or less wiggly world lines into the future and up the page. At some point in the future, the observer who started at point A will receive light signals that come from point B, and this is the first time that such an observer can be influenced by events that occurred at point B. But this observer can never have any influence on events at point B, because to send a signal there it would have to go backwards in time; any interaction is strictly one way." (13)

Now comes the interesting bit. If the universe is rotating (and everything else rotates: planets suns, galaxies etc. so why not?), then space-time will be dragged round in such a way that the light cones (everywhere in the universe) are tipped over. If it is rotating fast enough, then the light cones will tip over so far that an observer who starts from point A can get to point B without ever going outside the future light cone - that is without ever exceeding the speed of light. Using this method you could travel from A to B to C and back round the universe to Point A. (14) So, could this be a method of practical time travelling? Probably not, but is does indicate that time travel is not forbidden Einstein's theories of general relativity, and this concept of universal rotation and cone tipping has been the foundation for a number of other theories as to the possibility of time travel.

The idea of time travelling UFOs does appear to explain at least one other point. Researcher Jenny Randles explains. "If you travel a hundred years forward the building that you now work in might by then have been demolished and a busy motorway might run through the position. Your time machine could then appear right in front of a gigantic truck, merrily speeding along, oblivious to your arrival, which flattens you. Any journey backwards by thousands or millions of years could see the spatial location where you have begun your trip hugely altered, submerged under an ocean or raised up inside a volcano, for example. There is just no way that any machine developed for a physical move through time could do so whilst remaining on the ground. Indeed, there is only one relatively safe place where such a time transfer could happen - that is well above the surface, or better still outside our atmosphere altogether." (15) The idea of time travel could certainly answer some intriguing puzzles. One can almost imagine one such traveller in prehistoric Illinois asking a fellow traveller to hurry up and get back into the time machine. "Hold on, I've dropped something. That gold chain you gave me." "Oh, it'll turn up" comes the reply only to give one Mrs Culp her 15 minutes of fame millions of years later.

It should also be noted that time travel could also resolve the distance problem discussed earlier (though simultaneously making Randle's idea redundant.)This planet, like all other's, moves in space-time, for not only is the Earth revolving on its axis once every 24 hours, it is also revolving around the sun once every 365 days, and our galaxy itself is revolving once every 200 million years. There is nothing to suggest the universe itself is also not rotating. This effectively means, that if you went back in time 12 hours, you would not arrive in the same place as you left because you would also move in space-time.