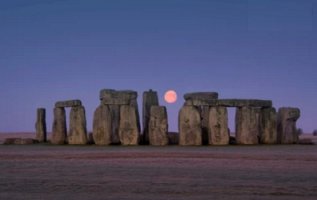 Whilst not the largest nor most ambitious stone and earthwork in Britain, Stonehenge is certainly the most studied and speculated about. We actually know very little about the site, and what it was built for, but we do know that the structure was built in stages and over a long period of time. Exact dating cannot be confirmed, yet it is generally believed that the work started around 3100BCE and ended around 1100BC. Archaeologists report that the first phase of construction consisted of a simple circular embankment comprising a few wooden poles and upright slabs. The second phase of the building was marked by the erection of two rows of bluestones forming a crescent at the centre of the site. The doorways and trilithons were completed in phase three and in phase four, about 1100BCE, the bluestones were reset and the roadway was extended (32).

It now appears that the early date of 3100BCE should be pushed back by several thousand of years, not because of some alleged astronomical connection, but because of carbon dating. And it should be pushed back to a time before any such construction should have even entered the minds or abilities of Neolithic man. This re-dating stems from a discovery made in 1997 when the bases of formerly huge wooden sighting posts were discovered at the Stonehenge site. It has now been demonstrated that these posts were aligned to target the Moon's northern most setting point and carbon dating revealed that they had been placed in position ten thousand years ago.

Of course this discovery does not mean that the other accepted datings should be abandoned: we know that Stonehenge was built in stages, it just appears that the earliest stages were built thousands of years earlier that previously identified. Yet up until around 4000BCE, the prehistoric people of southern Britain were still living in scattered groups, surviving on hunted game and fish, and eating wild plants. They lived in skin tents, neither growing their own crops nor keeping animals. Tools were still being made out of flint, bone or deer antler.

It is difficult to understand why such a people would have built an astronomical calculator four thousand years even before this Neolithic lifestyle at a time when the ice-age was finally drawing to a close - unless it was built by a civilisation which predated them. Further evidence of such an earlier civilisation was found in 1985 when a Japanese diver came across a curiously shaped stepped pyramidal structure off the coast of Yonaguni Island, close to Taiwan. This structure predates the earliest known signs of Palaeolithic settlement of Japan by over 5000 years.

The find was one of a number hidden under the sea with the best documented of them being named the 'Monument'. This structure has the general appearance of a vast underwater structure with steps or platforms and has been compared, although overly generously, with the various pyramidal and temple structures in the Americas. (33)

The Monument is over 160ft long in an east-west direction and over 65ft wide on a north-south direction. The top of the structure lies a mere 16ft below sea-level, however the base of the structure is approximately 80ft below the surface. If the Monument is artificial then it must have been carved at a time when it was above sea-level, and based on data of sea-level rises in the region (34) it will be between 8000 to 10,000 years old. As Jim Mower, an archaeologist at University College, London commented "If it is confirmed that the site is as old as 10,000 years and is man-made, then its going to change an awful lot of the thinking on south-east Asian history." (35) Mower drew this conclusion as the first signs of civilisation in Japan can only be traced back to 9000BCE, when local inhabitants were hunters and food gatherers. No archaeological records exist to suggest the presence of a culture so advanced as to be capable of building the now submerged structure. 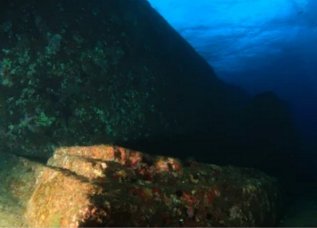 Robert Schoch, the Boston geologist, by this time intrigued by the idea of a lost, former civilisation, carried out an examination of the structure to determine if it was man made. He notes, "one of the first things I found is that the Yonaguni Monument is, as far as I could determine, composed entirely of solid 'living' bedrock. No part of the structure is constructed of separate blocks of rock that have been placed into position. This is an important point, for carved and arranged rock blocks would definitively indicated a man-made origin for the structure - yet I could find no such evidence." (36)

However Professor Masaaki Kimura, of the Department of Physics and Earth Sciences at Okinawa's Ryukyus University and the first scientist to investigate the site, is less cautious. "The object has not been manufactured by nature ... if that had been the case, one would expect debris from erosion to have collected around the site, but there are no rock fragments there." (37). Schoch does not agree however admits "we should also consider the possibility that the Monument might be a natural structure that was utilised, enhanced and modified by humans in ancient times ... on Yonaguni Island and elsewhere there is an ancient tradition of modifying, enhancing, and improving on nature. On Yonaguni there are very old tombs that stylistically appear to be comparable to the 'architecture' of the Monument." (38) Schoch concludes.