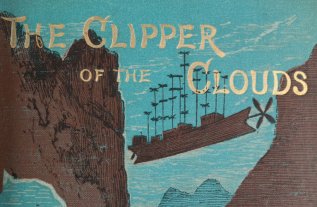 Of course the reports could have been observations of airships yet it was not until 1900, that the development of rigid airships - dirigibles - began, and not in America, but thousands of miles away in Germany. It may be, however, that this late 19th century phenomenon may have more Earthly origins, for it came a mere decade after Jules Verne published his Robur le Conquerant, a book which included this illustration (right) of The Clipper of the Clouds (above.) Yet there is other evidence of UFO sightings and strange phenomena around the end of the 19th Century. The following letter was sent to the Editor of Scientific American Magazine by Warner Cowgill, US Consulate, Maracaibo and published on 18th December 1886: "During the night of the 24th October last, which was rainy and tempestuous, a family of nine persons, sleeping in a hut a few leagues from Maracaibo, were awakened by a loud humming noise and a vivid, dazzling light which brilliantly illuminated the interior of the house.

"The occupants completely terror stricken, and believing, as they relate, that the end of the world had come, threw themselves on their knees and commenced to pray, but their devotions were almost immediately interrupted by violent vomitings, and extensive swellings commenced to appear in the upper part of their bodies, this being particularly noticeable about the face and lips. It is to be noted that the brilliant lights was not accompanied by a sensation of heat, although there was a smoky appearance and a peculiar smell. The next morning, the swellings had subsided, leaving upon the face and body large black blotches. No special pain was felt until the ninth day, when the skin peeled off, and these blotches were transformed into virulent raw sores. The hair of the head fell off upon the side which happened to be underneath when the phenomenon occurred, the same side of the body being, in all nine cases, the more seriously injured. The remarkable part of the occurrence is that the house was uninjured, all doors and windows being closed at the time. No trace of lightening could afterward be observed in any part of the building, and all the sufferers unite in saying that there was no detonation, but only the loud humming already mentioned. Another curious attendant circumstance is that the trees around the house showed no signs of injury until the ninth day, when they suddenly withered, almost simultaneously with the development of the sores upon the bodies of the occupants of the house."

Eleven years later, then House of Representatives member, Alexander Hamilton reported the following: "Last Monday night, about 10:30 we were awakened by a noise among the cattle. I arose, thinking that perhaps my bulldog was performing some of his pranks, but upon going to the door saw to my utter astonishment an airship slowly descending upon my cow lot, about forty rods from the house. Calling my tenant, Gid Heslip, and my son Wall, we seized some axes and ran to the corral. Meanwhile, the ship had been gently descending until it was not more than thirty feet above the ground, and we came within fifty yards of it. It consisted of a great cigar-shaped portion, possibly three hundred feet long, with a carriage underneath. The carriage was made of glass or some other transparent substance alternating with a narrow strip of some material. It was brilliantly lighted within and everything was plainly visible. It was occupied by six of the strangest beings I ever saw. They were jabbering together, but we could not understand a word they said. Every part of the vessel which was not transparent was of a dark reddish color. We stood mute with wonder and fright, when some noise attracted their attention and they turned a light directly upon us. Immediately on catching sight of us they turned on some unknown power, and a great turbine wheel, about thirty feet in diameter, which was slowly revolving below the craft began to buzz and the vessel rose lightly as a bird.

"When about three hundred feet above us it seemed to pause and hover directly over a two-year-old heifer, which was bawling and jumping, apparently fast in the fence. Going to her, we found a cable about a half-inch in thickness made of some red material, fastened in a slip knot around her neck, one end passing up to the vessel, and the heifer tangled in the wire fence. We tried to get it off but could not, so we cut the wire lose and stood in amazement to see the ship, heifer and all, rise slowly, disappearing in the northwest. We went home, but I was so frightened I could not sleep. Rising early Tuesday, I started out by horse, hoping to find some trace of my cow. This I failed to do, but coming back in the evening found that Link Thomas, about three or four miles west of Le Roy, had found the hide, legs and head in his field that day. He, thinking someone had butchered a stolen beast, had brought the hide to town for identification, but was greatly mystified in not being able to find any tracks in the soft ground.

"After identifying the hide by my brand, I went home. But every time I would drop to sleep I would see the cursed thing, with its big lights and hideous people. I don't know whether they are devils or angels or what; but we all saw them, and my whole family saw the ship, and I don't want any more to do with them. Hamilton has long been a resident of Kansas and is known all over Woodson, Allen, Coffey and Anderson Counties. He was a member of the house of representatives. He staked his sacred honor on the truth of his story. An affidavit follows: As there are now, always have been and always will be skeptics and unbelievers whenever the truth of anything bordering the improbable is presented, and knowing that some ignorant or suspicious people will doubt the truthfulness of the above statement, now, therefore, we, the undersigned, do hereby make the following affidavit: That we have known Alexander Hamilton for one to thirty years, and that for the truth and veracity we have never heard his word questioned, and that we do verily believe his statement to be true and correct. Signed: E. W Wharton, State Oil Inspector, M. E. Hunt, Sheriff', W. Lauber, Deputy Sheriff, H. H. Winter, Banker, H. S. Johnson, Pharmacist' J. H. Stitcher, Attorney, Alexander Stewart, Justice of the Peace, F. W. Butler, Druggist, James W. Martin, Registrar of Deeds, And H. C. Collins, Postmaster. Subscribed and sworn before me this 21st day of April 1897." (21)