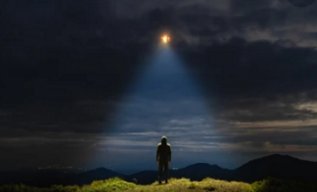 Indeed later that month, a letter from Lieutenant General Nathan F. Twinning, Commander of Air Material Command, Wright Field (later to become Wright Patterson Air Force Base and the location of the alleged Roswell debris), Ohio dated 23rd September 1947 stated: "[T]he considered opinion of this Command concerning the so-called 'Flying Discs" is that "the phenomenon reported is something real and not visionary or fictitious," and that it was possible "that some of the objects are controlled either manually, automatically or remotely." He recommended that "a detailed study" be carried out, noting "due consideration must be given" to the possibility flying saucers were "the product of some high security project" project, the chance "some foreign nation has a form of propulsion, possibly nuclear, which is outside our domestic knowledge," and "the lack of physical evidence in the shape of crash recovered exhibits which would undeniably prove the existence of these objects."

This letter has been taken as proof that no crash took place at Roswell or elsewhere, however the letter could simply be a straight forward lie. While sitting on a crashed UFO, the Air Force had no idea what to do with it, how it worked, nor what threat it potentially posed. To keep quiet and recommend a detailed study seemed the best course: allay public concern and attempt to find other crashed disks that might throw light on how they worked. This was certainly the view of researcher William Moore. He noted that if a disk or disks had crashed, the Twinning would have needed to set up a project to collate all available information. As Timothy Good notes, "it would hardly have been appropriate to let those on the other end of the data collection line know why such data was needed (5)." Moore adds, "It might have been best to maintain that there was no crashed disc to allay suspicion." (6)

Good goes on to note that there is evidence that the Air Intelligence Requirements Division under Brigadier General Schulgen, (the recipient of Twinning's letter), was aware of crashed disk material and that this information could only have come from Twinning's office. This evidence takes the form of an AIRD Draft of Collection memorandum dated 30th October 1947 which detailed much of Twinning's Air Material Command data, including the comment "While there remains a possibility of Russian manufacture, based on the perspective thinking and actual accomplishments of the Germans, it is the considered opinion of some elements that the object may in fact represent an interplanetary craft of some kind." (7) Good further notes that a former US military scientific and technological intelligence specialist studied Schulgen's intelligence collection tasking order and concluded "that it could not have been written in the language it contains unless a drafter (a Lieutenant Colonel Garrett of Schulgen's staff) had already inspected a captured flying saucer." (8)

By this time President Truman had acted swiftly to reorganise the US governmental agencies. Within weeks of Roswell (26th July 1947), although not necessarily because of it, he had signed the Armed Forces Unification Act, creating a Department of the Air Force, coequal with Army and Navy and creating a National Military Establishment under the Secretary of Defence. By the end of the year the CIA had been formed out of the Office of Strategic Services and the Central Intelligence Group. (Its first Director Vice Admiral Roscoe Hillenkoetter later confirmed the existence of extraterrestrial UFOs in a signed statement to Congress.)

The UFO puzzle continued to develop and as a result 'Project SIGN' was initiated on 23rd January 1948 to collect, collate and evaluate all information relating to UFO sightings (9). SIGN was based at the Technical Intelligence Division of the Air Material Command (AMC) at Wright Field, again, the home of the alleged Roswell wreckage. Two months later (17th March) McCoy advised the new Air Force Scientific Advisory Board that "This can't be laughed off ... We are running down every report. I can't even tell you how much we would give to have one of those crash in an area so we could recover whatever they are (10)." Again the phenomena was being taken seriously, but this letter further suggests that no crash saucer existed unless it was disinformation or any wreckage was held by another agency.

On 7th October 1948 Colonel Howard M McCoy Chief of T-2, Air Material Command's Intelligence Division, (home of Project SIGN) asked the CIA for help in "learning whatever they [UFOs] are." In a letter of that date he wrote, "To date, no concrete evidence as to the exact identity of any of the reported objects has been received. Similarly the origin of the so-called 'flying discs' remains obscure (11)." Then, later that month, Project SIGN, headed by Captain Robert Sneider, prepared its famous Estimate of the Situation (classified 'Top Secret') in which it concluded that the flying discs were of extraterrestrial origin. However Air Force Chief of Staff Hoyt S Vandenberg sent the report back without his approval on the grounds that it lacked solid proof and he ordered it destroyed (12).

On 3rd November 1948 General Cabell, Director of Air Force Intelligence at the Pentagon, wrote to Air Material Command: "The conclusion appears inescapable that some type of flying object has been observed. Identification and the origin of these objects is not discernible to this Headquarters. It is imperative, therefore, that efforts to determine whether these objects are of domestic or foreign origin must be increased until conclusive evidence is obtained." He requested that a new report be compiled discarding the rejected conclusions from the original 'Estimate of the Situation'. A day later the USAF announced the formation of the Rand Corp., (successor to Project RAND), to assemble most advanced scientific, technical, industrial and military knowledge available and bring it to bear on major Air Force decisions.