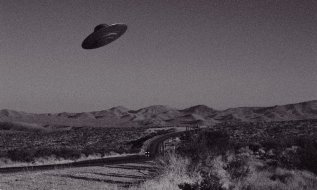 McCoy wrote back to General Cabell on 8th November; "Although explanation of many of the incidents can be obtained from the investigation described above, there remains a certain number of reports for which no reasonable everyday explanation is available. So far, no physical evidence of the existence of the unidentified sightings has been obtained. The possibility that the reported objects are vehicles from another planet has not been ignored. However, tangible evidence to support conclusions about such a possibility are [sic] completely lacking." The letter also contains the paragraph (10c) "Although it is obvious that some types of flying objects have been sighted, the exact nature of those objects cannot be established until physical evidence, such as that which would result from a crash, has been obtained." Cabell then advised the US Secretary of Defence, James Forrestal (below, left), on 30th November that "we must accept that some type of flying objects have [sic] been observed, although their identification and origin are not discernible." 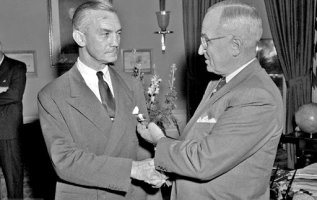 his view was confirmed on 10th December by a study prepared by Air Force Intelligence with the concurrence of the Office of Naval Intelligence which stated that UFO "identification and origin are not discernible," but strongly suggests the possibility that if they are of foreign origin; possibly Soviet developments of German designs (13). In February of the following year, Project SIGN issued its final report. It had initially stated that it considered that the objects might be Soviet in origin, however finally concluded that almost all reported sightings stemmed from either mass hysteria, hallucination, hoax or misidentification of know objects. Despite these conclusions, or more likely knowing that these public findings were inaccurate, the report recommended continued military intelligence control over the investigation of all sightings, and did not actually rule out the extraterrestrial hypothesis (14).

"No definite and conclusive evidence is yet available that would prove or disprove the existence of these unidentified objects as real aircraft of unknown and unconventional configuration. It is unlikely that positive proof of their existence will be obtained without examination of the remains of crashed objects." It appeared that whatever the phenomena was, the US needed to be aware of it and on 30th March of that year President Truman signed a bill providing for the construction of a permanent radar defence network for the entire country.

In August Project GRUDGE (the successor to Project SIGN) produced a substantial report regarding the UFO phenomenon that reached negative conclusions: "The extraterrestrial hypothesis has not excited during a long time the military minds." Project GRUDGE set about alleviating public anxiety about the phenomenon by stating that sightings were merely balloons, aircraft, planets, meteors or even large hailstones. The project itself decided that whatever the phenomenon was, it didn't threaten national security, and was only damaging insofar as its existence seemed to be encouraging people to believe in UFOs. On 27th December 1949, therefore, the Air Force announced the project's termination, however Project Blue Book would continue to report and collate UFO sightings. (15). 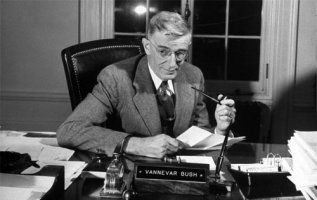 This conclusion however did not appear to reflect the view of then American President Truman who on 4th April 1950 publically stated "I can assure you the flying saucers, given that they exist, are not constructed by any power on Earth." Nor was it the real view of the American authorities, for on 21st November 1950 Canadian Senior Radio Engineer Wilbert Smith advised his government that he had made enquiries through Canadian Embassy staff in Washington who had advised him that not only did flying saucers exist, but the matter was the most highly classified subject in the US with Dr. Vannevar Bush (above) leading the US enquiries. The CIA were watching all this activity and became alarmed at a wave of sightings over the United States in 1952. It reacted by forming a special study group within the Office of Scientific Intelligence (OSI) and the Office of Current Intelligence (OCI) to consider the situation (16).

It appeared a two-pronged tactic was emerging; public denial and behind the scenes investigation. In 1952 the US Air Force set up the public Project Blue Book to investigate unexplained aerial sightings and later than year, during 14th-15th August, senior officials of the CIA were briefed on the subject of UFOs by the Air Force. During this briefing they were advised that "no debris or material evidence has ever been recovered following an unexplained sighting (17)." However President Truman continued to be concerned and on 4th November 1952 the US National Security Agency (NSA) came into existence with the task of intercepting foreign government communications.

The following month, on 2nd December, a CIA memorandum from Marshall Chadwell, Assistant Director of Scientific Intelligence (OSI) to the Director of Central Intelligence, Walter Bedell Smith, stated "Recent reports reaching CIA indicated that further action was desirable and another briefing by the cognisant A-2 and ATIC personnel was held on 25 November. At this time, the reports of incidents convince us that there is something going on that must have immediate attention. Sightings of unexplained objects at great altitudes and travelling at high speeds in the vicinity of major US defence installations are of such nature that they are not attributable to natural phenomena or known types of aerial vehicles." Shortly after this memorandum, the CIA proposed to the National Security Council that UFOs should be given the status of 'priority project' and the CIA assembled, with the US Air Force, a group of top level scientists who come to be known as the Robertson Panel (after its chairman) to publicly be seen to consider the matter.