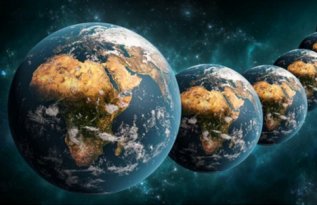 If only the Earth only rotated on its axis, you would be on the opposite side of the earth (1/2 a rotation) every twelve hours, however as both the Earth and the galaxy (and perhaps the universe) are rotating, if you stepped back in time by say 500 years, you would no longer be anywhere near the Earth, which would be 500 years away in the direction of rotation. Perhaps careful interstellar mapping and knowledge of universal movement could allow the traveller the ability to simultaneously travel back in time and to planets which rotate into Earth's space-time path. There are a few more possibilities for travellers to reach us without having to make the full time-consuming journey. The first is a matter of straightforward physics. Access to complex, sub-atomic particle accelerators (to the unscientific mind - giant microscopes!) has confirmed that matter, including life matter, is simply made up of light waves. (Indeed Einstein's E=MC2 makes this point, energy = mass x speed of light squared). 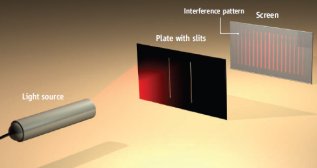 Put simply, our universe is operating on a certain wavelength. A phased shift, where we simply operate on a slightly different wavelength, may reveal whole new worlds that are beyond our sensory constructs. (Interestingly enough, 'interference' between these wavelengths has been postulated as an answer for ghosts and other paranormal activity) (16). Such phased shifts may explain how UFOs appear to give off strange glows, dart around the skies at incredible speeds (not speeding but disappearing and reappearing with the mind playing tricks), and not travelling great distances but merely slipping through the same space-time at differing wavelengths. The idea of parallel universes is in fact a matter of sound scientific reasoning, based on quantum theory. A cornerstone to this theory is that light acts both as a wave and a particle. This can be evidenced by the famous two-slit experiment (above). Two slits (not surprisingly) are made in a partition. On one side of this partition is a source of light of a particular colour (i.e., wavelength). Most of the light will hit the partition but a small amount will go through the slits creating a characteristic 'wave' effect. The same effect is generated, however, when electrons are sent through the slits one at a time. As Hawking notes "each electron, therefore, must be passing through both slits at the same time!" (17)

This appeared to turn much of Einstein's work on its head. "Einstein's general relativity theory is the theory of the cosmos, a theory of stars and galaxies held together via the smooth fabric of space and time. Quantum theory, by contrast, is a theory of the microcosm, where sub-atomic particles are held together by particle-like forces dancing on the sterile stage of space-time, which is viewed as an empty arena, devoid of any content." (18) Hawking then took quantum theory to its ultimate conclusion, allowing the existence of infinite numbers of parallel universes, effectively meaning that we live within a multi-verse rather than a universe; an infinite multi-verse connected by an infinite number of wormholes. The possibilities are staggering, for in theory at least, a wormhole could exist within our Solar System connected to an entirely different universe, making space travel no more challenging or impossible than using the current rail systems. This chapter has attempted to explore possible methods of craft reaching Earth given the practical difficulties that the vastness of space presents to the potential traveller. Whilst some of these ideas appear to rule themselves out as possibilities, the ideas expressed are merely reflections of our current state of knowledge. Fifty years ago the idea of 'light cones', 'hypercubes' and 'wormholes' would themselves have been alien concepts and dismissed by orthodox science.

Who knows what the next fifty years will bring, in either exploring these ideas further or revealing new theories and explanations. Even as recently as October 1996, an article in the scientific journal Nature put forward a theory that a spaceship could be surrounded by a field of 'exotic' elemental matter (or virtual particles which can emit and absorb photons, thus changing their mass for an incredibly short time.) This would have the effect of propelling the spaceship at a speed far greater than light itself (19). Carl Sagan, the noted astronomer, stated as early as 1968 at a hearing before the House Committee on Science and Astronautics, "Now, one thing is clear, which is this: If there are other technical civilisations, any random one of them is likely to be vastly in advance of our own technical civilisation. For example we are only 10 or 15 years into having the technology of interstellar communication by radio astronomy. It is unlikely there is any other civilisation in the galaxy that is that backward in their technical expertise." (20) Radio signals have been detected before in space, but what made this discovery particularly exciting was that astronomers had recently noted that the star has a planet similar to our own, and at a similar distance from our own star.Designated 70 Vir B, this planet is believed to be over six times the mass of Jupiter and orbits around its Sun in an eccentric orbit every 116 days.

Then in June 1988 it was revealed that some of the world's leading astronomers had collected more than 100 unexplained radio signals during the routine surveillance of space. A report in the British Sunday Times of 7th June 1998 stated, "these faint, pure tones have no natural origin and could have been created artificially, the scientists said. They do not rule out the astonishing possibility that this strange radio traffic could have extra-terrestrial origin." (22) However many on this planet were convinced that extra-terrestrials were already visiting us, and that view was shared by the CIA, the US Airforce and even the American President.