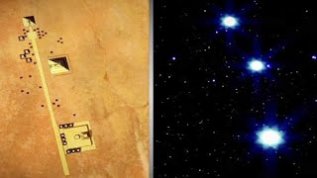 It became Hancock's contention that Vyse forged the hieroglyphics to justify the costs of his expedition, although this view finds little favour with Egyptologists. Hancock and his co-author Robert Bauval found even less favour with these Egyptologists with their later theory that not only was the Great Pyramid not associated with the Pharaoh Chephren, but the plans for the structure were drawn up eight thousand years before his reign. This concept was born from events in November 1983 when Bauval, his wife and daughter, were camping in Saudi Arabia with friends. Bauval woke up at one o'clock one morning and gazed at the stars for some time before being joined by his friend who attempted to explain to him how to use Orion's belt to find the rising point of Sirius.

During his explanation, the friend advised Bauval "the three stars of Orion's Belt are not perfectly aligned. If you look carefully you will see that the smallest of them, the one at the top, is slightly offset to the east." (31) This of course was not a new observation. What was new, or at least rediscovered, was that the three pyramids at Giza were similarly laid out on the Giza plateau. And not only were the three pyramids laid out as though they formed part of Orion's belt, the whole area appeared to mirror the sky. Hancock established that other pyramids in Egypt were positioned as if part of Orion and the River Nile flowed through Egypt just as the Milky Way appears to flow across the night sky. Despite this initial excitement however, Bauval and Hancock noted that the angle of Orion's belt did not exactly match the layout at Giza. Using a computer to reconstruct the positions of the stars in the sky over millennia, they found that the only time the stars on the belt of Orion perfectly matched the position of the pyramids was in 10500BC.

In isolation, of course, this date could be dismissed as pure fantasy. However other scientific evidence has already confirmed that the Sphinx was carved thousands of years before its accepted date. The Sphinx also has a link to the date of 10500BE: for it was then and only then that the giant structure faced its own image in the sky. Convinced of a land-star connection, Hancock went on to establish whether the layout of other historic sites mirrored other constellations in the sky and he published his findings in a recent book 'Heaven's Mirror'. In this work Hancock attempts to demonstrate an "interface between ground and sky" at sites around the world and to also link these to the date 10,500BCE to support his theory that there was a now lost civilisation in existence at that time.

One site Hancock identified was at the temple of Angkor Wat in Cambodia. Located in north-western Cambodia, Angkor, the capital of the Ancient Khmer Empire was possibly founded around the Ninth Century AD by King Jayavarman II. However, the city reached its peak glory in the 12th Century under Kings Suryavarman II and Jayavarman VII. 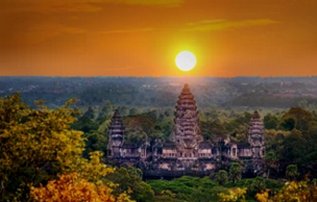 The most beautiful and most famous monument in the city, Angkor Wat, lies about one kilometre south of the Royal town of Angkor hom which was founded by Jayavarman VII. King Suryavarman II, who reigned between AD 1131 and 1150, dedicated the Temple of Angkor Wat to the Hindu God Vishnu. The Temple was constructed over a period of 30 years, and illustrates some of the most beautiful examples of Khmer and Hindu art.

Covering an area of about 81 hectares, the complex consists of five towers, which are presently shown on the Cambodian national flag. These towers are believed to represent the five peaks of Mount Meru, the Home of Gods and centre of the Hindu Universe. Angkor Wat features the longest continuous bas-relief in the world, which runs along the outer gallery walls, narrating stories from Hindu mythology. 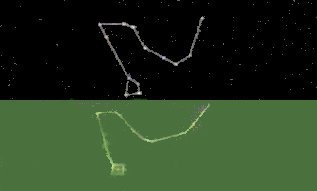 With the decline of the Ancient Khmer Empire, Angkor Wat was turned into a Buddhist Temple and was continuously maintained, which helped its preservation. In 1992, the UNESCO World Heritage Committee declared the monument, and the whole city of Angkor, a World Heritage Site. Hancock demonstrates that mathematics built into the structure of the temple proving that on the spring equinox, Angkor Wat would be aligned to the rising sun. He also demonstrates that nearby temples, when connected by a line, appear to show the constellation Draco in the sky: just as the Giza pyramids appear to show Orion's belt in the night sky, so does Angkor Wat appear to show Draco.

However, when Hancock attempted to compare the layout at Angkor with the constellation of Draco in the sky at the time the temple was built, 1150AD, he found that Draco's positioning did not reflect the ground layout. However by turning the clock back, he was able to find a time when the ground and sky layouts appeared to mirror one another. And the date at which this happened was the same as at Giza: 10,500BCE.

Yet Hancock's assertions are ultimately unsatisfying. He can provide no link between 10500 years BCE and the construction at Angkor in 1150AD, albeit he makes a mild assertion that the current temples may have been constructed on more ancient sites. Whilst Hancock is able to demonstrate with clarity the astronomical complexities of Angkor Wat, the same precision is simply not evident in the layout of the temples on the ground and the constellation of Draco in the sky. There is, however, other evidence scattered throughout the world of a former civilisation that does not rely upon mere speculation nor seemingly contrived links. One such piece of evidence recently came to light at Stonehenge in Britain.