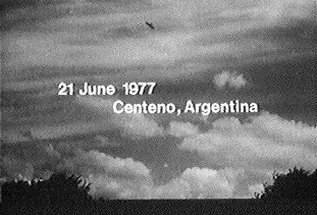 We tend to associate the UFO phenomena with the USA but it is much more international in nature however some countries such as Russia and China have tended to maintain secrecy of alleged UFO sighting not least because of their forms of government but also because UFOs were considered a military threat not necessarily emanating from space but from their cold war enemies. Objectors to the idea of UFOs not only claim that nearly all, if not all sightings are misidentified phenomena, but that any such sightings are merely figments of over active American minds. Yet the reality is, sightings have been made across the world. Above is an image taken above Argentina in 1977. 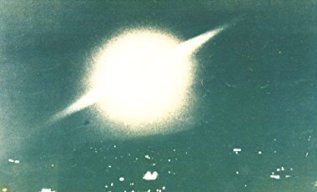 This huge orb of light (above) was seen by thousands of people and was photographed at Maspalomas on Gran Canaria in 1976. The picture was released by the Spanish Air Force who could not explain the event. The image below was photographed by a US Marine Air group pilot over the north-east China Sea during the Korean war. Reproduced in Timothy Good's Beyond Top Secret Good comments "While the sharply delineated straight line in the middle and the black lower half suggest photographic trickery, similar effects have been noted in other cases." 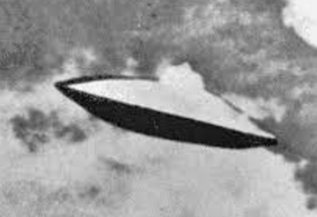 The image below was taken in 1941/2 at Tientsien, a town in the Hopeh Province of North China. Of course visual sighting are always open to interpretation (and misinterpretation). Sometimes objects seen in the sky are very real, but also very secret and reports are unlikely to generate a candid response from the military. One such secret military project was Project Mogul; a US top secret project to develop a means of detecting and monitoring Soviet nuclear weapons which conducted its operations from Alamogordo Army Air Field, New Mexico in June and July 1947 using high-altitude balloon arrays and attached instrument packages (26). 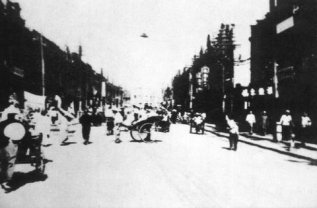 It has been claimed that it was the wreckage from one of these Mogul flights that could account for the debris found at the infamous Roswell site, of which more later, and also at another crash at nearby Corona. This is certainly the view of Karl Pflock, a former CIA officer, whose career included a period as Deputy Assistant Secretary of Defence for Operational Test and Evaluation (27). The crash landing of a top-secret project in open territory would undoubtedly have led to the immediate sealing of the area and collection of all recoverable remains.

Of course many of the reported sightings of UFOs are hoaxes. In fact such hoaxes accounted for 33% of all sightings claimed to be UFOs in a formal United States Air Force investigation of the phenomenon in 1949. A further 32% could be accounted for astronomically, 12% were identified as weather balloons, however 23% remained unaccounted for (28). It is this 23% that has long interested believers in extraterrestrial contact, a belief that has widespread support throughout the scientific community. As Carl Sagan stated "The earth may have been visited by various galactic civilisations many times (possibly in the order of 10,000) during geological times.It is not out of the question that artefacts of these visits still exist, or even that some kind of base is maintained (possibly automatically) within the solar system to provide continuity for successive expeditions." (29) However, one of the main arguments against the likelihood of such alien visits is that the distances between us and our universal neighbours - even if they do exist - are so great that the possibility of physical contact can almost be ruled out. But can it be ruled in?