And then another. Eventually they emerged exhausted into a low-ceilinged corridor that slanted upwards until it intersected with a level passageway. The men hoped that after all their efforts this passageway would lead them to their destiny - a hidden chamber full of lost knowledge and perhaps those craved for riches. The passageway did lead to a chamber, but this chamber (later named the Queen's chamber) was also empty. The explorers were perplexed. Why go to all this trouble to house seemingly nothing? They continued to believe that somewhere in this giant structure, something must be hidden or buried and they were determined to find it. 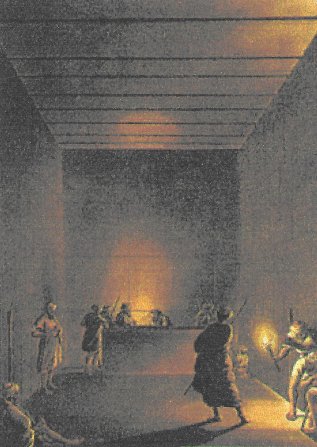 The search continued with this time an increasing sense of excitement, for the explorers then discovered a corridor with walls of polished limestone twenty-eight feet high. They named this area the Great Gallery. It is easy to understand a feeling of mounting tension as they climbed a further 156 feet into the unknown before they discovered a vast chamber, thirty-four feet long, seventeen feet wide and nineteen feet high. They named this the King's chamber. This chamber, lost for so many centuries, slowly began to reveal its secrets as the light of the men's torches cast a yellow glow on its walls. But far from being filled with great riches, the room appeared empty. But then, there, at the far wall, they could see a sarcophagus. A sarcophagus so large that the room was clearly built around it, and if the room, then perhaps the pyramid itself. The men moved tentatively forward and looked inside.

Nothing. No body and certainly no treasure. In a fury the explorers hacked into the floors and walls determined to find some recompense for their endeavours, but there was nothing; not only no treasure nor knowledge, but mysteriously, no sign whatsoever that the room had ever been entered before their visit, for they were clearly the first to get by the huge stone plugs in the passageway, and there was no other apparent way in. The men left the pyramid perplexed, mystified and dejected. Clearly some people had gone to extraordinary lengths to build this complex and intriguing structure, with its shafts, blocks and chambers, yet there was apparently not a single clue as to why they had done so; not a name, body, writing or even a single hieroglyph etched on a wall to hint at the pyramid's purpose or function.

Following this first known foray, little is known of pyramid exploration until 1638 when a British mathematician, John Greaves visited Egypt. His contribution to the Great Pyramid enigma was the discovery of a narrow well that descended vertically from the bottom of the Grand Gallery. He concluded that this was probably an escape route for the builders after they had set in place the granite plugs that had caused Al Mamum so much frustration. Unfortunately Greaves' planned reconnaissance of the tunnel came to an abrupt end after only sixty feet; not because of any blockage or other secret, but because of the numbers of bats and the stench of their foul air.

Over the following centuries thousands visited the pyramids, curious and eager to seek out its secrets. Without realising it, each and every one of those visitors contributed to the eventual discovery of another puzzle that continues to intrigue researchers: for each visitor left behind small traces of water vapour from breath and perspiration. The cumulative effect of these deposits over the centuries literally made the inside of the pyramid start dissolving. As the build-up continued, it became inevitable that unless something was done the structure itself would become unsafe. The task of finding a solution to this problem was given to the German Archaeological Institute. 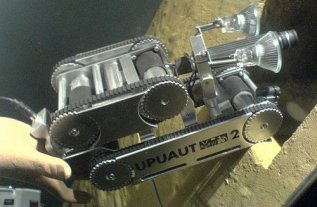 The Institute appointed an engineer, Rudolf Gantenbrink, as a consultant to work on the problem. Gantenbrink's experience of robotics in both nuclear plants and undersea exploration, coupled with his amateur fascination with the pyramids made him an ideal choice for the job. He recognised that the solution to the immediate problem of humidity was to increase the airflow throughout the pyramid. As it was already known that the pyramid had a series of ducts throughout, Gantenbrink set about designing a robot that could travel up and down these ducts to make an evaluation of their condition from the inside. This would then inform what work would be required to clear the shafts from centuries of debris.

The robot explorer he invented he named 'Upuaut' (above), an ancient Egyptian word for 'Opener of the Way', and on completion of its work, heavy-duty fans were fitted to the ducts to blast fresh air into the pyramid thereby solving the water vapour problem. Following on from the success of Upuaut, Gantenbrink went on to design 'Upuaut 2' (left, a modified version of the original robot with its own traction system that would allow it to climb up and down the shafts unaided. Upuaut 2 also had headlights; a laser guidance system and a small video camera to send back pictures to a monitoring console. In due course the robot was lowered into the shafts to start its work.

Gantenbrink later sent a video of the second machine's journey to Robert Bauval, an author and long time investigator of the pyramids. Bauval takes up the story: "I quickly put the [video] tape in and watched as the robot appeared outside the Great Pyramid. Rudolf [Gantenbrink] put the robot into the opening of the southern shaft in the Queen's Chamber and then guided it with the controls on a worktop inside the chamber. The robot began filming inside the shaft. Slowly and laboriously it climbed, going upwards for about sixty-five meters before coming to a stop. In front of it, clearly visible, was what looked like a miniature portcullis slab, of the sort used by the Egyptians to seal off a burial chamber.