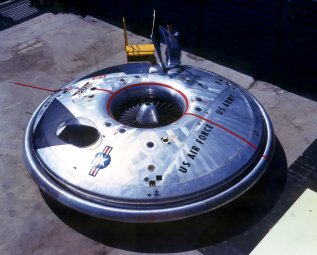 After the photograph was published in the papers, speculation grew that the disk was a secret weapon, and one that may have accounted for many of the UFO sightings during previous years. In response to the speculation, the US Air Force released the an official photograph of the craft. It was called the 'Avro' and had first been launched in 1955. A CIA memo of that year confirmed that the craft was based work undertaken by German scientists, notably Miethe, during WWII. The design was later abandoned in the late 1960s with the Air Force maintaining it was still at an experimental stage when abandoned. The 1990s were to reveal the craft was part of the secret Project Silver Bug (video ~ below), a project to develop a craft that had VTOL (vertical take-off and landing ~ above) capabilities that would dispense with the need for runways - and reduce the risks of such runways been targets of attack thus immobilising any aircraft that may rely on it.

Other German scientists similarly brought their expertise - and designs - into the US after the war. America's Aircraft Year Book notes how many of them worked at Ft. Bliss (von Braun et al) and Wright Field: - the first and second homes of the Roswell wreckage. Among those in the German group at Wright Field were Rudolph Hermann, Alexander Lippisch, Heinz Schmitt, Helmut Heinrich, Fritz Doblhoff and Ernst Zundel. Hermann was attached to the Peenemunde Research Station for Aerodynamics where Germany's V-2 rockets were hatched and launched against England. A specialist in supersonics, he was in charge of the supersonic wind tunnel at Kochel in the Bavarian Alps. He was also a member of the group entrusted with Hitler's futuristic plans to establish a space-station rocket-refuelling bases revolving as a satellite about the Earth at a distance of 4,000 miles - a scheme which he and certain high ranking AAF officers in 1947 still believed possible." 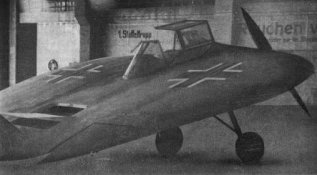 One of these scientists Dr. Alexander Lippisch had designed another German craft that could be mistaken at the time for a flying disc, certainly at least when viewed from the side. Lippisch had developed a number of projects leading up to the war, having been inspired by witnessing a flight by Orville Wright in September 1909 when a boy of 14. By November 1944, Lippisch, along with his students, had constructed the DM-1, a delta with 60 degree swept leading edges. This craft was later to be flown at a speed of 497mph under the power of a rocket motor, and was shipped back to the US at the end of the war along with its creator. The DM-1 was to inspire the design of many US delta-wing aircraft such as the F-102 and F-104. Lippisch joined Collins Radio Company as an expert on special aeronautical problems and in 1966 founded the 'Lippisch Corporation'. He went on to develop the X-113A Aerofoil Boat before dying in 1976 at the age of 81.


Another craft that looked suspiciously like a 'flying disk' was the AS-6 (above). This craft was built by Arthur Sack following encouragement from Ernst Udet, Germany's Air Minister in 1939. Constructed at the Mitteldeutsche Motorwerke Company, and completed at the Flugplatz-Werkstatt at the Brandis Air Base in early 1944, the plane was not a success, and not further developed. A similar craft to the AS-6, the V-173, was built by 'Chance-Vought', and known as the 'flying pancake'. The V-173 has the honour of being the one occasion that the US authorities actually 'admitted' that technologies developed in Germany during the war years could account for the wave of UFOs seen over America in the 1940s. The Navy released a picture of a V-173 in 1947 (below) during the wave of UFO excitement generated by Kenneth Arnold's sighting and the headline of the saucer crash at Roswell. 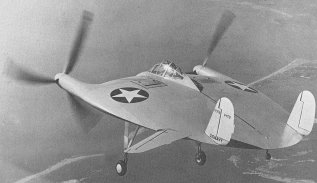 The Navy stated that the V-173 was the only craft in operation at that time that could in any way come close to the flying disks being sighted everywhere. Certainly the V-173, or another development at Chance-Vought was mistaken for a UFO by a local resident Thomas C. Smith whilst working for the company a year before the famous Roswell incident. In 1997 Smith disclosed his story which appeared in the Lancaster New Era newspaper in Lancaster, Pennsylvania on 12th July, 1997. In the article Smith stated he had seen a flying saucer, but not a visitor from another planet but one that "was a human-engineered, experimental aircraft nestled in a Connecticut hangar. "'My God, what is that?' the 20-year-old Smith wondered. 'It was standing there on these stilts.' It reminded Smith of something out of Orson Welles' 1938 radio broadcast 'The War of the Worlds,' about a Martian invasion of Earth.