Inside the Pyramids II 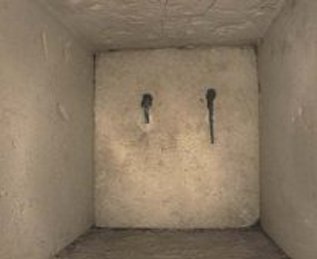 Attached to the slab, or sliding door, were two copper fittings, one of which was broken, a fragment of it lying on the floor of the shaft. This last part of the shaft was lined with polished Tura limestone, which as far as we know was used inside the pyramids only for lining chambers and was considered sacred by the pyramid builders. It could also be seen from the movement of the robot's laser beam that the slab at the end of the shaft was not fully in contact with the floor, but left a gap of about half a centimetre; there was a triangular chip removed from one corner, providing a tantalising glimpse of a grooved channel and a dark recess beyond. Though not conclusive, the video evidence was that what we were looking at was a hatchway leading, perhaps, to some hidden chamber." (24).

The door was discovered on 22nd March 1993 [NOTE the following was written before a recent drilling through the door which revealed yet another door further up the passage] yet no further exploration of what may lie behind the door has been undertaken; indeed a week after the discovery Gantenbrink was told to pack up his robot and leave the site. The German Archaeological Institute denied there was anything mysterious about this. "The project was finished. The shafts had been explored and there was nothing further to do. The blocking stone that was found at the end of the shaft is very normal. All these shafts were originally blocked. It is the normal construction. It is not possible to open the blocking; the Egyptians would never allow it." (25)

Gantenbrink however did not agree and applied an engineer's perspective to the issue, citing the polished limestone noted by Bauval around the area of the door. This stone is found nowhere else in the 180 meters of shafts explored to date and suggested an upgrading to something grander, rather than abandonment of the shaft as Egyptologists propose. Gantenbrink also noted evidence of structural damage around the doorway (found no where else in any of the shafts) indicative of internal stress in the area, suggestive of a cavity, and this idea is supported by the stress relieving construction techniques deployed around the door; blocks laid vertically rather than horizontally. The door also appears to be free of mortar, whilst all the joints between the blocks forming the shaft are mortared. (26)

Gantenbrink does not speculate as to what may be found behind the door, only that it is a door. "I take an absolute neutral position," he stated, "it is a scientific process, and there is no need whatsoever to answer questions with speculation when these questions could be answered much more easily by continuing the research. We have a device [ultrasonic] that would discover if there is a cavity behind the slab. It is nonsensical to make theories when we have the tools to discover the facts." (27) Yet the Egyptian authorities did not want to know. The English language Egyptian Gazette of 20th April 1993, nearly a full month after the find, even claimed that the Upuaut robot had never even entered the shafts, 'German Scientist's claim a hoax' ran the headline (28) before the editor changed his mind and reinvented the story as a major find. Strangely, the director of the Giza plateau site, Dr Zahi Hawass was sacked at the same time as the find (although later reinstated) and Gantenbrink's scheduled meeting with the Egyptian Minister of Culture "never happened. A press conference was scheduled. It never happened." (29)

Two months later, Dr Mohammed Ibrahim Bakr, the man responsible for sacking Hawass, was himself sacked, and on leaving, claimed that he had been brought down by an official 'Mafia' whose aim was to impede the archaeological work for their own purposes. Whatever was going on in the Egyptian administration was not resolving the mystery of the door found in the pyramid shaft. Gantenbrink reluctantly recognised by this time that he would be unable to progress his desire to establish whether or not there is a concealed chamber in the Great Pyramid on his own. He therefore proposed that his robot be given to the Egyptian authorities and he would restrict his role to merely training an operator so that the Egyptians would remain in full control of the entire operation. In November 1994 Gantenbrink received a reply to this proposal from the Secretary-General of the Supreme Council of Antiquities, Dr Abdul Nour El-Din which read "Thanks for your offer to train the Egyptian technician. Unfortunately we are very busy for the time being, therefore we will postpone the matter." (30)

Yet again, the Egyptian authorities appeared to have failed to exploit opportunities available to them, but why? The answer is actually very simple, for any claims or information that might suggest that the Sphinx and the pyramids may pre-date the Egyptian civilisation are seen as neo-colonial attempts to rob the Egyptians of their heritage. This could not be allowed to happen, for not only would it undermine the Egyptian 'role' in world history, but potentially demoralise Egyptian society itself and have implications for current political masters and Egypt's financial infrastructure. To date, then, nothing has been found inside the structures on the Giza plateau that throws any light on the missing civilisation that constructed the Sphinx ... except perhaps some latter day findings by British explorer, Colonel Howard Vyse in 1837. Vyse, in then typical British gunboat diplomacy style, started his exploration of the Great Pyramid by blasting his way through the rock above the King's Chamber.

There he discovered four sealed chambers and allegedly found hieroglyphics painted in red on the walls, one of which included the name of Chephren, thus the later association. Indeed this is the only association between Chephren and the Great Pyramid. Researcher Graham Hancock, however, casts down on the authenticity of the hieroglyphics noting that the hieroglyphic 'graffiti' was the only sign of Chephren's name found anywhere in the pyramid. Secondly, the graffiti was located in an obscure chamber where only Vyse had access, and lastly, several of the hieroglyphs were painted upside down and others were mis-spelt or written using bad grammar.