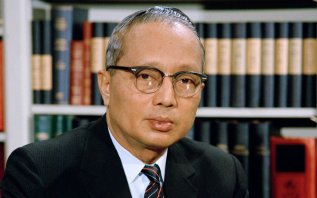 "I consider that UFOs are the most important problem facing the United Nations next to the war in Vietnam." (19) US General Chidlaw, In charge of United States Continental Air defence. In February 1953 Chidlaw went on record to state; "We have stacks of reports about flying saucers. We take them seriously when you consider we have lost many men and planes trying to intercept them."

In 1991 The United Nations Committee for Peaceful Uses of Outer Space formulated a Declaration of Principles Concerning Activities Following the Detection of Extraterrestrial Intelligence The move declared that the committee would make no response to signals from outer space 'until appropriate international consultations had taken place.' Professor Donald Tarter from SETI states that a leader such as Saddam Hussein (now deceased) might send out a message to the aliens in question claiming that he is the legitimate ruler of the world and the aliens might believe him (18).

Monsignor Corrado Balducci, a Vatican Theologian close to the Pope, went on national Italian television five times in the early months of 1998 to state that extraterrestrial contact is a real phenomenon. He announced that the Vatican is receiving information regarding extraterrestrial contact from its nuncios (embassies) in various countries such as Mexico, Chile and Venezuela. He added that he is a member of a Vatican commission looking at extraterrestrial encounters and how to cope with its implications, for inevitably Catholicism will be in need for a major doctrinal updating should ET contacts ever be formally acknowledged.

Dr James E. McDonald, Professor of Atmospheric Physics, University of Arizona stated; "I have absolutely no idea where the UFOs come from or how they are operated, but after ten years of research, I know they are something from outside our atmosphere." 1967 (21). McDonald has also stated "I speak not only from intimate knowledge of the past investigations but also from three years of detailed personal research, involving interviews with more than five hundred witnesses in selected UFO cases, chiefly in the United States. In my opinion, the UFO problem, far from being the 'nonsense problem' it has been labelled by many scientists, constitutes an area of extraordinary scientific interest." (22)

"I've been convinced for a long time that the flying saucers are real and interplanetary. In other words we are being watched by beings from outer space." Chop was deputy public relations officer for NASA and former United States Air Force spokesman for Project Blue Book. Chop also stated in Sightings: UFOs "The Air Force has never denied the possibility that interplanetary spacecraft exist. There are many people in the Air Force who believe in UFOs."

The former Commanding Officer of the British Royal Air Force stated in August 1954 "Of course the flying saucers are real and they are interplanetary."

Captain Edward J Ruppelt, a former Chief of the Air Force who actually headed Project Blue Book scorned the ongoing quest for proof in his 1956 book, The Report on Unidentified Flying Objects, by asking "does a UFO have to land at the river entrance to the Pentagon near the Joint Chief of Staffs' Office? Or is it proof when a ground radar station detects a UFO, sends a jet to intercept it, the pilot sees it, and locks on with his radar, only to have the UFO streak away at a phenomenal speed. Is it proof when a jet pilot fires at a UFO and sticks to his story even under the threat of court martial." (23)

"The least probable explanation is that these things UFOs are artificial and controlled. My opinion for some time has been that they have an extraterrestrial origin." (24)

th May 1962 General MacArthur stated: "You now face a new world, a world of change. We speak in strange terms, of harnessing the cosmic energy, of ultimate conflict between a united human race and the sinister forces of some other planetary galaxy."