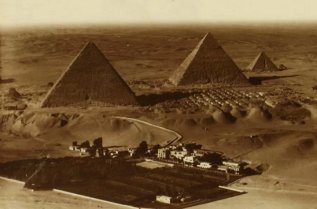 Since the time of the classical Greeks people have gazed at the Great Pyramid, the sole survivor of the ancient world's seven wonders, and wondered about it's mysterious past. Apparently built on the edge of known history, unanswered questions have been asked about who built it, and how could man, in antiquity, have the skills for its construction. We are told the pyramid was built as a tomb for Chephren around 2575 years BCE. Situated ten miles west of Cairo, the pyramid covers a ground area of 13.1 acres and was built with over 2.3 million limestone blocks each averaging two and a half tons each. Some idea of the enormity of the structure is revealed when it is noted that the pyramid contains enough stone to build a wall of foot-square cubes, two thirds around the Earth at its equator - some 16,600 miles.

We know those who constructed the Great Pyramid were competent builders and mathematicians for the structure is aligned to the cardinal compass points to within one twelfth of a degree and the thirteen acre base area is level to within a fraction of an inch. The pyramid also lies on the longest land-contact meridian on the Earth's surface and at the geographical centre of Earth's land mass, including the then supposedly unknown Americas and Antarctica.

The design also appears to have incorporated advanced mathematical and astronomical knowledge far in advance of that belonging to any known civilisation. The four slightly hollow faces climb to an angle of 51 degrees 51 feet and 14.3 inches to a summit platform. The apex is missing, however by projection to the theoretical apex; the angle of slope gives a relationship of the pyramid's height to the perimeter of is designed base equal to the radius of a circle to its circumference. In case you didn't follow that, if you divide the distance around the base of the pyramid by its height, the product is a measurement that should not have been known to ancient man. 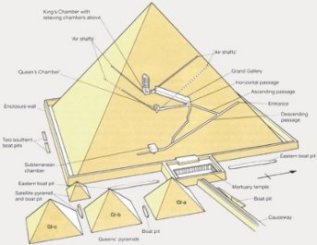 There are other mathematical marvels. Of several units of measurement, the Sacred Cubit (25.0265 inches, one ten-millionth of the mean polar radius of the Earth as determined during the International Geophysical Year 1957-8) is found in multiples establishing the pyramid as a textbook of geophysical and astronomical data. The side of the designed base square measures 365.242 Sacred Cubits - the exact number of days in the solar year. Other measurements derived from the 'hollowing-in' of the sides as established in the 1920s by Leeds engineer David Davidson accurately represent sidereal (365.256) and anomalistic (365.259) years. The pyramid or primitive inch (1.00106 inches: 1/25th of the Sacred Cubit) is also implicated in the repetition of specific values. Measurements of exactly 365.242"P are found in the King's Chamber complex.

Whatever its past, the Great Pyramid kept it secrets on the great Giza Plateau for millennia until the ninth-Century Arab Caliph, Abdullah Al Mamum undertook to investigate it after he had heard that the pyramid contained secret chambers full of highly accurate ancient maps of the world and other astronomical charts and tables. 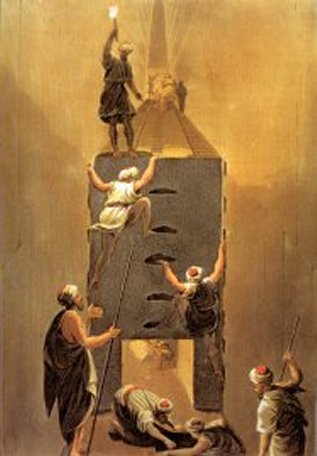 With a team of architects, builders and stonemasons, the Caliph set off in the year now known to Westerners as AD820 to enter the giant structure for the first in thousands of years. It soon became obvious why they were in fact the first adventurers up to that time to enter the pyramid, for they were unable to find an entrance to the structure. Eventually they hit upon the idea of heating the limestone blocks then dowsing them in cold vinegar until they cracked. Using this painfully slow method they managed to burrow through 100 feet of solid rock until reaching a narrow, four-foot high passage that climbed steeply upwards.

At the top end of this passageway they discovered the pyramid's original entrance, forty-nine feet above the ground. They then followed the passageway downwards. Eventually after a slow descent into the unknown, they found a chamber. An empty chamber. The men explored around in the eerie darkness; convinced that there must be other chambers or passageway - for surely the structure had not been built only to leave it empty?

Sometime later, Al Mamun's men returned with news. They had discovered what appeared to be another corridor, this time sloping upwards. However, if it was a corridor, possibly leading to a room full of lost knowledge and riches, then its mystery was to remain, for the corridor was blocked by a gigantic granite plug, barring them from proceeding further. The men then attacked the granite with hammer and chisels, however the block proved to be too strong. Disillusioned and frustrated they rested, before realising that if they could not the plug hack through the plug, then maybe they could chisel around it. And they did. And they found another plug. So they did the same thing again. And they found another plug.