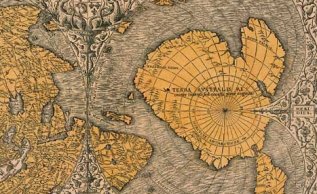 The mountain ranges that skirted the coasts suggested the numerous ranges that have been discovered in Antarctica in recent years. It was obvious, too, that this was no slapdash creation of somebody's imagination. The mountain ranges were individualized, some definitely coastal and some not. From most of them rivers were shown flowing into the sea, following in every case what looked like very natural and very convincing drainage patterns. This suggested, of course, that the coasts might have been ice-free when the original map was drawn. The deep interior, however, was free entirely of rivers and mountains, suggesting that the ice may have been present there." (22) The fact that this map shows the complete continent of Antarctica seems remarkable in itself, suggesting that far from mankind having made superficial contact with part of the continent, s/he was familiar with the entire area at least three hundred years before Antarctica was supposedly discovered. Hapgood asked the Cartographic Section of the 8th Reconnaissance Technical Squadron, Massachusetts, to evaluate both the Piri Reis and Oronteus Fineaus map (above). In reply, he received the following letter from Captain Lorenzo W Burroughs, the chief of the section, who gave a summary of their findings;

"A) The solution of the portolano projection used by Admiral Piri Reis, developed by your class in Anthropology, must be very nearly accurate; for when known geographical locations are checked in relationship to the grid computed by Mr Richard W Strachan (MIT) there is remarkably close agreement. Piri Reis' use of the portolano projection (centred on Seyene, Egypt) was an excellent choice, for it is a developable surface that would permit the relative size and shape of the earth at that latitude) to be retained. It is our opinion that those who compiled the original map had an excellent knowledge of the continents covered by this map. As stated by Colonel Harold Z Ohlmeyer in his letter (July 6, 1960) to you, the Princess Martha Coast of Queen Maud land, Antarctica appears to be truly represented on the southern sector of the Piri Reis Map. The agreement of the Piri Reis map with the seismic profile of this area made by the Norwegian-British-Swedish Expedition of 1949, supported by your solution of the grid, places beyond a reasonable doubt the conclusion that the original source maps must have been made before the present Antarctic ice cap covered the Queen Maud Land coasts.

"It is our opinion that the accuracy of the cartographic features shown in the Oronteus Fineaus (sic) Map (1531) suggests, beyond reasonable doubt, that it was also compiled from accurate source maps of Antarctica, but in this case the entire continent. Close examination has proved the original source maps must have been compiled at a time when the landmass and inland waterways of the continent were relatively free of ice. The Cordiform Projection used by Oronteus Fineaus (sic) suggests the use of advanced mathematics. Further, the shape given to the Antarctic continent suggests the probability, that the original source maps were compiled on a stereographic or gnomonic type of projection (involving the use of Spherical trigonometry.) We are convinced that the findings made by you and your associates are valid, and that they raise extremely important questions affecting geology and ancient history, questions which certainly require further investigation." (23)

In order to explain these ice-free coastlines, Hapgood concluded that Antarctica must have been located a few thousand miles further north than its present location, and slipped to its current position in an Earth Crust Displacement. The idea behind Earth Crust Displacement is that ice builds up at the poles, and, on reaching a critical point, the outer crust of the planet slips under the weight of the ice, casting previously temperate areas into the polar positions. (This initially sounds impossible, however movement of the Earth's plates is now accepted, for example India drifting and crashing into Asia causing the rise of the Himalayas.)

It was this conclusion that led writers such as Graham Hancock, Rand and Rose Flem-Ath et al. to claim that Antarctica may, in fact, have been the location of the legendary Atlantis. Such a concept was certainly compatible with Plato's story; and would account for the destruction of the civilisation as described by the author. The continent was certainly big enough to be home for an entire civilization, and its location further north in the Atlantic would have made its position ideal as a central link between the 'old' and 'new' worlds, accounting for some of the connections discussed in this work. However, the concept of Earth Crust Displacement is built upon a misunderstanding of plate tectonics.

The crust of the Earth is not floating on a liquid nor even a semi-liquid mantle. In fact, the crust is securely adhered to the mantle and connected by the asthenosphere, a layer more viscous than lava and certainly not fluid enough to allow for rapid movement. In fairness to Hapgood, many of the studies that reached these conclusions were made after his theory was proposed, however more recent authors have been careless in continuing to propose this theory even after it has been unequivocally disproved. As noted above Albert Einstein supported Hapgood's theory, however the conclusions he reached, like Hapgood's, were only as good as the data then available. Many years on, we now know the data to be obsolete. The Earth Crust Displacement theory also ignores some inherent evidence.