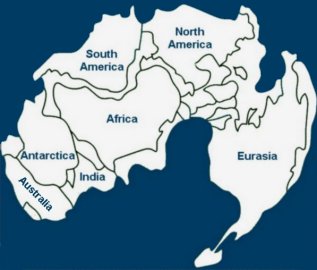 Academically they are quite right, but how on Earth could an 18th Century cartographer possibly know that millions of years ago the hidden continent had an inland sea-way running through its middle? The answer is simple, he could not, for the technology that revealed this has only been developed this century and man simply did not exist in any intellectual form when this knowledge was last known. And yet it appears that Bauche did know. (To see these map images in more detail click here.). Perhaps, however, there is another solution that fits the facts of these maps a little more comfortably and credibly. History records that as early as the 6th Century BCE, Pythagoras was proposing that the Earth was round, and other academics, Parmenides (450BCE), Aristotle and Eratosthenes (276-194 BCE) agreed (32). By 150 CE the Egyptian geographer, Ptolemy, had concluded that the world was symmetrical and must therefore have a southern continent - Terra Australis Incognita, however he also believed that this southern continent was cut off from the known world by a 'Torrid Zone' of fire and fearful monsters (33).

The concept then, of an undiscovered southern continent, has been held for over two millennia. Ptolemy's teachings, however, became lost in the Middle Ages, but were preserved by the Arabs. They reappeared in Europe from the 10th Century onwards as the Moors invaded Spain. Then in 1410, Ptolemy's works were translated into Latin and French and became accessible to a wider audience, stimulating curiosity to discover the unknown continent. Later that century the fear of the Torrid Zone was finally overcome as Bartholomew Diaz reached the Cape of Good Hope in 1488 and was followed a decade later by Vasco de Gamma who went round it to reach India. The significance of these voyages being that it became known that Africa was merely an extension of the known world, the Torrid Zone was fictitious and the southern continent, if it existed, lay elsewhere and further south and was accessible. 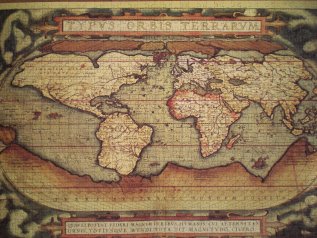 Then, in 1501 a Florentine seaman, Amerigo Vespucci, set off to explore the South American coastline. Exactly what areas Vespucci explored are unknown, but it appears that he charted the area, for when Magellan journeyed there in September 1519 he seemed to have knowledge of the coastline, noting: "This strait was a circular place surrounded by mountains, and to most of those in the ships it seemed that there was no way out from it to enter the said Pacific Sea. But the captain-general said that there was another strait which led out, saying that he knew it well and had seen it in a marine chart of the King of Portugal, which a great pilot and sailor named Martin of Bohemia had made (34)." Magellan also reported seeing land to the south, land that became known as Tierra del Fuego. From information taken from Magellan's voyage, a map was later constructed in Antwerp in 1570. The map showed Terra Australis as extending south from Tierra del Fuego off the tip of South America. (It was not until 1577 when Drake charted the area that this mistake was rectified.) The important point to note here is that early maps simply placed the southern continent, which had been 'known' about for centuries, somewhere outside known and charted areas.

As a result of this, earlier maps appear to be more confident about the southern continent than slightly later maps which were based on actual data rather than accepted concepts. For example the 1620 Dutch map below starts to show the outline of the southern coast of Australia and some tentative lines around Antarctica, from reports from ships that strayed south. Now as far as the Piri Reis map is concerned it appears much more likely that its sources lay in slightly earlier cartography undertaken by peers such as Vespucci who had been in the area a mere 13 years previously than some 'lost civilisation' who supposedly lived there - without trace - thousands of years before any civilisation is known to have existed and in conditions that would have made living there an impossibility at that time. It also appears suspicious that both the Piri Reis map and the map from Magellan's voyage both crush 'Antarctica' against Southern America, suggesting they are contemporaneous in origin rather than divided by thousands of years.

As far as the Oronteus Fineaus, Bauche and other ancient maps are concerned, they all date from no earlier than the beginning of the 16th Century - a time when we know voyages were taking place in the area and maps were tentatively being drawn, even if they were inaccurate. Given that we also know that Antarctica had been in sub-zero temperatures for thousands of years, has had no plant life for millions of years, is bathed in darkness most of the year round and the so called ancient map 'evidence' of life there does stand up to any real scrutiny, it is not hard to conclude that Antarctica was not the location of the lost people.

So how can the discovery of ferns, dinosaurs and other mammal life on a once warm Antarctica be explained? Here, at least Hapgood et al were treading on safer ground, for whilst Earth Crust Displacement may have been proved to be a fallacy, the theory of Continental Drift has is origins firmly roots in science and fact. This theory suggests that the Earth's crust is split into a number of 'plates' that support the continents. These plates are moved around the ocean spreading (the addition of new crustal rock along mid-oceanic ridges) and by convection currents in the rocks of the Earth's mantle, beneath the crust. This theory helps explain how fold and block mountains, volcanoes and earthquakes occur.

Antarctica then, was not always hiding in the sunless frozen wastelands of the planet, but many millions ago was located further north where it enjoyed a more temperate climate. When the Lystrosaurus roamed the continent, the Earth resembled the top illustration and by the time the Cryolophosaurus ellioti was making its mark on the planet, Antarctica had broken away to form its own continent. Over millions of years the continents continued to drift away from each other, with India ploughing across the oceans to later collide with Asia and force up the Himalayan Mountains. Slowly the continent drifted into what is now called the Antarctic Circle, making conditions impossible for land mammals to survive.

So with Antarctica ruled out, it appears that the search for the location of any lost peoples has been exhausted. Yet despite this, there remain those intriguing puzzles that simply cannot be explained by conventional history. If no-one on Earth can account for them, then perhaps we should be looking elsewhere.