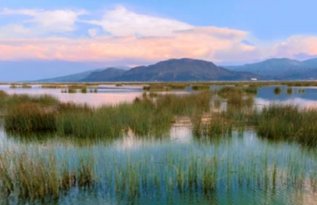 "Since last September [1997] Professor Kimura has seemingly softened his position somewhat regarding how much of the Yonaguni Monument is 'man-made' or 'artificial' and how much is 'natural'. He is now referring to the Monument as being 'terraformed' - that is, natural geological features that have been manipulated of modified by human hands ... This is essentially the position that I have come to, so perhaps Dr Kimura and I are converging in our opinions of the Monument." (39) With the Sphinx in Egypt and the Yonaguni Monument off Japan both indicating the possibility of an ancient and lost civilisation, a similar find from prehistory in the Americas would appear to confirm its former existence. And indeed high on the Peruvian and Bolivian border lies the evidence. The mystery starts with an ancient waterbed that covers an area of 3200 square miles, being 70 miles wide and 138 miles long. The inland waterway is called Lake Titicaca and is littered with millions of fossilised seashells. The lake also features a range of oceanic types, as opposed to freshwater marine life. Creatures brought to the surface in fishermen's nets have included examples of seahorses. (40) During the 19th Century Professor P. M. Duncan, studying the lake, noted the existence of siluroid, cyprinoid and other marine fishes in the lake. (41)

According to legend, Lake Titicaca (above) is the birthplace of the Inca civilisation. The sun god instructed his children, Manco Capac and his sister-wife Mama Ocllo, to travel until they found a place where a golden rod would sink into the Earth. Having discovered such a place on an island in Lake Titicaca, they gave birth to the Inca race, the 'children of the sun'. This island, known as the Island of the Sun, remains one of the lake's most scared places and the local Indians still celebrate this 'birthday' with a festival every November 5th (42). Close by the lake is the ancient city of Tiahuanaco. There is evidence that the city was once a port, having extensive docks positioned right on the earlier shoreline of the now inland waterbed. One of these wharves is big enough to accommodate hundreds of ships. (43). There would be nothing at all remarkable about Lake Titicaca nor its city were it not for the fact that the lake, resplendent with fossilised sealife and its nearby port city is now situated some12,500 feet above sea level. At some point in its past, the lake was at sea level, and some immeasurable force has pushed it skywards to rest high in the thin mountain air of the Peruvian Andes where now 'only the graceful reed boats of the native people who still fish its depths and the restless winds of the past disturb the calm surface.' (44) 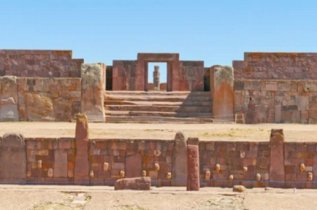 The City of Tiahuanaco is also full of mystery. Lying at a height of some 13,000 feet, it lies on a plateau that looks like the surface of a foreign planet. The atmospheric pressure is nearly half as low as at sea level and the oxygen content of the air is similarly small. This isolation and altitude makes the very construction of the city all the more remarkable. Who had built the city? "I asked the natives whether these edifices were built in the time of the Inca," wrote Pedro Cieza de Leon at the time of the Spanish Conquest, "They laughed at the question, affirming that they were made long before the Inca reign and ... that they had heard from their forebears that everything to be seen there appeared suddenly in the course of a single night." (45) Another chronicler noted the tradition that the stones had been miraculously lifted off the ground, "they were carried through the air to the sound of a trumpet." (46)

The historian Garcilaso de la Vega made the following notes about the city soon after the sixteenth century conquest: "We must now say something about the large and most incredible buildings of Tiahuanaco. There is an artificial hill, of great height, built on stone foundations so that the earth will not slide. There are gigantic figures carved in stone ... these are much worn which shows their great antiquity. There are walls, the stones of which are so enormous it is difficult to imagine what human force could have put them in place. And there are the remains of strange buildings, the most remarkable being stone portals, hewn out of solid rock; these stand on bases anything up to 30 feet long, 15 feet wide and six feet thick, base and portal being all of one piece ... How, and with the use of what tools or implements, massive works of such size could be achieved are questions which we are unable to answer ... Nor can it be imagined how such enormous stones could have been brought here." (47) The 'enormous stones' weighed 100 tons and were topped with other 60-ton blocks for walls. Smooth surfaces with precision accuracy join the blocks of stone which were held together with copper clamps (right), a masonry technique not known to have been used anywhere else in South America, but in use in Ancient Egypt. There isn't much left now of this ancient city. In the 1500s the Spanish systematically destroyed the buildings, and later many of the stone blocks were looted for houses in a nearby village. More recently some of the remaining stone was taken to lay a railroad right-of-way.

Lake Titicaca is located in the Andes mountains, between Peru and Bolivia. The area covers about 9000 square kilometres and lies about 3800 meters above sea level. Its maximum depth is estimated to be approximately 460 meters, very unusual for a continental lake. The lake now is a very small portion of what was once a vast sea. At least two civilizations that managed to reach the degree of empires have their roots here: the Tiwanaku civilization and the more well known civilization of the Incas. What's interesting is that in the mythology of the two presents the genesis with their leaders emerging from the waters of Lake Titicaca. This is the reason that Lake Titicaca is considered a sacred lake. There are many legends about the lake. They say that under the surface there are cities abundant in gold and silver, but still people were not able to find them. They say that in its waters live mermaids singing sweet and deadly. When you are at Titicaca, between the high mountains, with very little air, this whole place seems like a dreamland. As an anecdote structures have recently been found underneath the waters with "temples built of huge blocks of stone, with stone roads leading to unknown places"