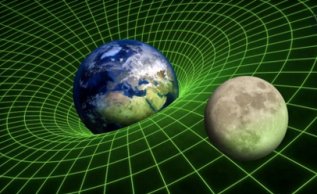 Imagine a human able to set out on a mission in the year 1900 returning to Earth in 1997. They would have aged less than thirty years, but the world would be almost unrecognisable to them." (5) So, it would appear that such space travel is less than likely, but then, as science appears to close one door, it offers new opportunities. One such opportunity could be 'wormholes'. This idea was first proposed by Kip Thorne and Michael Morris in 1987 in the American Journal of Physics as a 'follow through' of previous work by Albert Einstein. In 1915 Einstein had announced his theory of general relativity. This explained that gravity was not a force of attraction between two bodies, but a property of space-time itself. This is best explained by imagining a sheet of rubber stretched over a wooden frame (above).

On the rubber sheets are placed a number of balls of different sizes and weights (representing planets and stars.) If you were to roll a ball across the surface of the sheet, the ball would be 'attracted' to the others as it rolls down the slope towards them. Now if one of the balls was extremely small and also immensely heavy, it would stretch the rubber to an infinite extent without ripping it. This is a Black Hole. Thorne and Morris recognised that two such Black Holes could 'find each other and join up, thus creating a gateway through space through which a craft could travel enormous distances in short periods of time. Hawking, however, urges a note of caution, "at first, this form of space travel seemed possible ... Later work, however, shows that these solutions are all very unstable: the slightest disturbance, such as the presence of a spaceship, would destroy the 'wormhole' (below), or passage, leading from the black hole to the white hole. The spaceship would be torn apart by infinitely strong forces. It would be like going over Niagara in a barrel." (6) 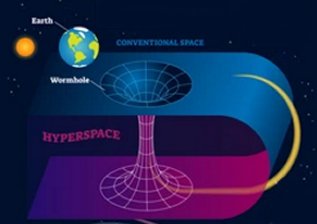 It appears that the options for space travel are running out. However, another method of space travel might be by stepping outside our three dimensional universe. Again, Hawking explains; "One can picture this in the following way. Imagine that the space we live in has only two dimensions and is curved like the surface of an anchor ring or Torus. If you were on one side of the inside edge of the ring and you wanted to get to a point on the other side, you would have to go round the inner edge of the ring. However, if you were able to travel in the third dimension, you could cut straight across." (7).Such talk of extra dimensions can be confusing. It is certainly easier to grapple with the following concepts in two and three dimensions, and once the concept is grasped, to then relate it to additional dimensions.

To help with this, it will be useful to enter a world created by clergyman Edwin Abbot (right), headmaster of the City of London School. He wrote a book entitled Flatland: A Romance of Many Dimensions where everything only existed in two dimensions. When Flatland interacts with the third dimension events and feats are achieved which appear fantastic and impossible to the two-dimensional Flatlander. Take for example, placing a Flatlander in prison. All that would be needed would be to draw a circle around the prisoner and escape would be impossible in two dimensions. However, a three dimensional person could pull the Flatlander into the third dimension, making it appear to the jailer that the person has disappeared into thin air.

The three dimensional person could then place the Flatlander back in Flatland at a different location. (If feeling mischievous, he could even flip him over, making it appear that his internal organs were now on the wrong side.) In fact three-dimensional person could perform all sorts of trickery in the eyes of his two-dimensional counterpart. Three-dimensional man could pass through doors, step into mountains, appear and disappear at will, reach into an object without opening it (a must for medical operations!) enter banks and simply take cash from vaults. And of course, as noted above, simply step out of prison if caught.