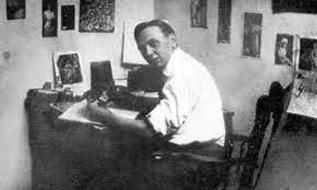 However, despite all of this, there is no conclusive evidence that the Azores were ever home to a large technologically advanced civilisation at any time in its past. There are, however, other possible locations for sightings of submerged architectural remains have been noted off Boa Vista Island in the Cape Verde Island chain. The Canaries have also been proposed as a possible location given that when the Spanish conquerors of those islands arrived they found remains of buildings and ancient cities, yet the Guanche's, who lived on them, were merely a stone age people who were no longer capable of constructing anything more than simple huts. It would appear that the options for identifying a potential home for any lost civilisation running out. Yet, as with the Azores, evidence of its remains could be hidden underwater.

That was certainly the vision of an American seer born into a small farming family in Kentucky, USA, in the last quarter of the nineteenth century. As a young boy, this seer, Edgar (above), would often tell his parents that he had been having strange visions, including talking to dead relatives. These events continued throughout his early years and later in his youth Edgar began entering self-induced trances. As a teenager he used these states to suggest cures for any ailments he may have been suffering from, and later he increased his activities to enter trance states to assist others who approached him for medical advice. By 1910, Edgar Cayce had become famous throughout America as a trance healer, psychic and Seer. With a growing reputation, Cayce began individual 'life readings' for clients before making more prophetic visions affecting the whole of mankind. Such predictions included The Second World War, Californian earthquakes and the submersal of New York and Japan. 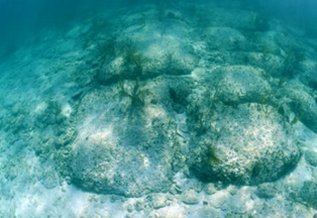 One of his more intriguing prophecies stated that Plato's legendary Atlantis would rise from the sea in 1968 or 1969 at a small pacific atoll called Bimini (above). This prophecy led to great excitement and gave new impetus for the search for the legendary island. The idea of Atlantis rising from the bottom of the ocean is not as ridiculous as it first sounds. As noted above, there is much evidence of land rising from the sea, however this has normally been associated with volcanic activity, which would surely destroy any traces of civilisation and Cayce was clear that Atlantis itself would arise, not its remains spewed out by an angry volcano. However, there is evidence that land can rise and fall without associated volcanic activity. 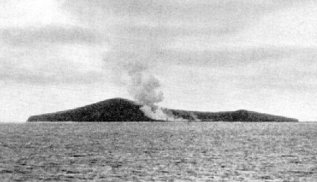 Falcon (or Jack-In-The-Box Island) had been discovered in the South Pacific in 1780 by the Spanish explorer, Maurelle. The Government of Tonga planted over 2000 coconut palms on the island in 1892, however within two years, the trees, along with the island itself, had disappeared beneath the ocean (14). A similar fate befell the fortress of Caravan-Sarai in the Caspian Sea that had been erected in 1135AD only to slowly disappear into the sea. The fortress's very existence turned into legend, however it rose again from the sea floor in 1723 and is still visible (15). Similarly, the Temple of Jupiter-Serapis in the Bay of Naples had been built in 105BC but sank into the Mediterranean only to rise again in 1742AD (16).

The concept of ancient remains rising from the seas was therefore supported by documentary record, so, on hearing Cayce's words, those fascinated by the Atlantis mystery turned their attentions to the Bimini area. And sure enough, in 1968 as predicted, an American pilot, Robert Brush, spotted what appeared to be a strange square shape on the seabed in the very area where Cayce had stated Atlantis would re-emerge. This shape had never been observed before, and appeared to support Cayce's vision of Atlantis arising from the ocean floor. Brush managed to photograph this apparent underground structure from the air and later showed the picture to the French born oceanographer, Dimitri Rebikoff. Rebikoff, who had gained some twenty years experience of underwater exploration in the Mediterranean and was President of the Institute of Underwater Technology, decided to organise an expedition to the site to investigate. He approached Dr J. Manson Valentine, a palaeontologist, geologist, underwater archaeologist and former Yale University professor to assist in this expedition.

In 1968 Rebikoff and Valentine discovered that the dark rectangle on the seabed was an ancient building, possibly a temple, but now covered in sea plants. The building itself measured approximately 100 by 75 feet in size and is located near the north end of Andros Island, the largest island in the Bahamas (17). Rebikoff was well aware that some natural formations can be mistaken for man-made structures, however he commented "nature can make circular shapes and a lot of other shapes, but nature cannot make a square angle - that is always the work of man."

Rebikoff was hopeful his discovery might lead to further discovery stating, "the archaeological rule is this - when you find a temple like structure, there is a city or town around it (18)." Early indications appeared to suggest that this was finally the sunken remains of the missing civilisation. Valentine and Rebikoff donned diving gear and examined the submerged building. They stated they could make out chambers or rooms in the ruins on the seabed and they also noted that the building faced due east to west, resembling the Uxmal Temple of the Turtles in Yukatan.