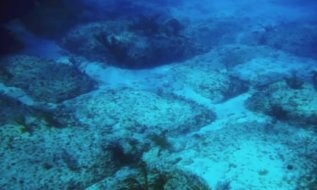 Determined to prove their archaeological rule, Valentine and Rebikoff extended their underwater quest for other signs for an Atlantis emerging from the sea floor. They were not disappointed. Valentine takes up the story: "The most exciting piece of evidence that on a grand scale [there] might indeed exist under the seas of our hemisphere [a lost city] came on the second day of September 1968, when the writer, diving in three fathoms off the north west coast of North Bimini, was amazed to discern an extensive pavement of rectangular and polygonal flat stones of varying size and thickness, obviously shaped and accurately aligned to form a convincing artifactual pattern. These stones had evidently lain submerged over a long span of time, for the edges of the biggest ones had been rounded off. Some were absolutely rectangular, sometimes approaching perfect squares. The larger pieces, at least 10 to 15 feet in length, often ran the width of parallel-sized avenues while the smaller ones formed mosaic like pavements covering broader sections. Where the sand had washed away between them, another deeper layer of stones appeared below." (19)

They named their discovery The Bimini Road although it was not immediately obvious if it was a road, a sunken wall, foundation or even a dock. What was known was that it lay off the east coast of North Bimini and appeared to consist of blocks fitting together in a pattern, and according to researchers, supported by stone pillars placed underneath them. Valentine and Rebikoff now had their underwater 'temple', and road. What they needed were other ruins to complete their vision. They did not have to wait long, for their activities had generated growing interest in the area, and sure enough, further from Bimini, at a depth of about 100 feet, pilots of commercial and private planes began reporting sightings of vertical walls and even a great arch.

D. G. Richards in an article in the Journal of Scientific Exploration gives an account of the investigations both amateur and professional of the Bimini waters. Richard concluded that there are indeed anomalies under the waters and he detailed three of these based on an aerial photograph taken at 6000 feet. Firstly he noted a 90-degree bend in the road which he considered was decidedly anomalous for a beach rock formation. Secondly he could identify a parallel row of stones and lastly a series of regularly spaced piles of stones which extended over 1.5 miles, cutting diagonally across ancient beach sites (20). 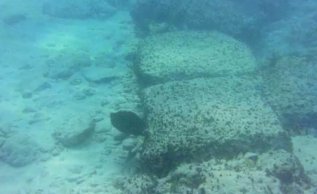 Richards also employed a satellite image of the area from which he observed other 'regular' features, such as a triangle, a pentagon, and a sharp, right angle corner with mile long sides. However on actually inspecting these regularities from a small boat, Richards found no obvious structures of any kind, instead, he noted that sea grass and white sand had caused the patterns. Despite this, he concluded that these superficial patterns might reflect the presence of artificial structures under the sediments. Valentine, himself, commented of the rocks that made up these supposed structures, "many of [them] are flint-shaped micrite, unlike soft beach rock. The lines of closely fitted stones are straight, mutually parallel, and terminate in cornerstones. The stone avenue does not follow the curving beach rock-line that follows the shape of the island, but is straight.

"The long avenue contains enormous flat stones propped up at their corners by pillar stones like the dolmens off the coast of Western Europe. Perfect rectangles, right angles, and rectilinear configurations are unaccountable in a natural formation. One end of the complex swings into a beautifully curved corner before vanishing under the sand. No-one has yet dug underneath it, so we don't know how far down the stones go" (21). Dating tests have been applied to the rocks that comprise the Bimini Road, and although stones themselves cannot be dated, the fossilised mangrove roots growing over the stones of the Bimini Road, have given a date of 10-12,000 years old. This fitted in well with Plato's assertion that Atlantis had disappeared beneath the ocean in 9600BC, over 11,500 years ago. Could the ruins at Bimini actually be the lost Atlantis as Valentine et al had proposed, with added support from the vision of a respected psychic?

There was certainly supporting evidence. A dive made by the French submarine Archimede off the northern coast of Puerto Rico, revealed flights of steps cut in the steep sides of the continental shelf off Andros. Whilst it has never been established where the steps lead to, it is clear that they were not cut underwater. Furthermore, a submarine expedition of the Frenchman Jacques Cousteau explored a huge grotto off the same island, with stalagmites and stalactites under 165 feet of water. As these features can only be formed in the air, the grotto must once have been a cave well above sea level. From submarine sediments on the walls of the grotto, it has been ascertained that the cave went down into the sea some 12,000 years ago (22).

All this was very interesting, but not very scientific. Consequently, carbonate sedimentologists and other geologists decided to visit the Bimini islands to establish whether the claims being made had any validity. Detailed studies have been undertaken since that time by Ball and Gifford (1980), Gifford (1973) Harrison (1971), Shinn (1978) and McKusick and Shinn (1978). Other studies have been undertaken by Davaud and Strasser (1984), Strasser and Davaud (1986) and Supko and others (1970). With grants from National Geographic, Gifford (1973) and later Ball and Gifford (1980) undertook a detailed study of the Road starting off with the assumption that it was indeed an archaeological site. For the study, they surveyed the three linear strips of slabs that make up the Road; Completed photomosaics of the features composed of a linear concentration of slabs; described the orientation and physical characteristics of the slabs; surveyed in the position of the strips of slabs in relation to benchmarks on North Bimini; obtained core samples from individual slabs within the road; prepared petrographic thin sections from the cores and other samples from individual slabs and dated samples from the slabs by radiocarbon and uranium-thorium methods. Their 1980 observations were that there was no evidence that the Bimini Road was anything other than a natural formation (23) (See Appendix I).