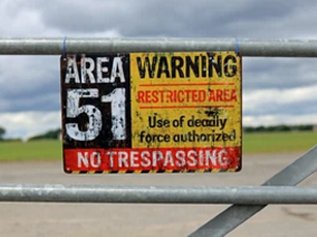 The information supplied to Smith is now known to have come from Dr. Robert Sarbacher, at that time a consultant to the Research and Development Board and President and Chairman of the Board of the Washington Institute of Technology. Smith, who later suffered from stomach cancer, made sure that his files were hidden from the US government after his death, however when they were uncovered a hand-written note that detailed a conversation between Smith and Sarbacher was found dated 15th September 1950: Smith: ... I have read Scully's book on the saucers and would like to know how much of it is true. [Scully authored a book entitled Behind the Flying Saucers which was published in 1950 and first drew attention to stories of recovered crashed UFOs and aliens. Captain Edward Ruppelt, who in 1953 had recently retired as head of Project Blue Book, told Scully and his wife "Confidentially ... of all the books that have been published about flying saucers, your book was the one that gave us the most headaches because it was the closest to the truth (9).

Sarbacher: The facts reported in the book are substantially correct.

Smith: Then the saucers do exist?

Smith: Do they operate as Scully suggests on magnetic principles?

Sarbacher: We have not been able to duplicate their performance.

Smith: Do they come from another planet?

Sarbacher: All we know is, we didn't make them, and it's pretty certain they didn't originate on earth.

Smith: I understand the whole subject is classified.

Sarbacher: Yes, it is classified two points higher even than the H-bomb. In fact it is the most highly classified subject in the US Government at the present time.

Smith: May I ask the reason for classification?

Although a legitimate source of information, Sarbacher stated on a number of occasions that his involvement in the UFO/alien affair was very little (although no-one wanted to believe him.) His information came from first hand accounts from scientists from the R&DB (Research and Development Board) who had attended Wright-Patterson Air Force Base (around 1949-1950) concerning the military recovery of flying saucers and bodies of occupants. The Canadians talked to him because they already had dealings with him and his office was only a few minutes walk away from the Canadian Embassy. In 1983 Sarbacher was contacted by researcher William Steinman and gave further information (Appendix II) :

"2. Regarding verification that persons you list were involved, I can only say this: John von Neuman was definitely involved. Dr Vannevar was definitely involved, and I think Dr. Robert Oppenheimer also. ... although I had been invited to participate in several discussions associated with the reported recoveries, I could not attend the meetings. I am sure that they would have asked Dr. von Braun, and the others that you listed were probably asked and may or may not have attended. ... About the only thing I remember at this time is that certain materials reported to come from flying saucer crashes were extremely light and very tough. I am sure our laboratories analysed them very carefully. There were reports that instruments or people operating these machines were also of very light weight, sufficient to withstand the tremendous deceleration and acceleration associated with their machinery. I remember in talking with some of the people at the office that I got the impression these 'aliens' were constructed like certain insects we have observed on earth, wherein because of the low mass the inertial forces involved in operation of these instruments would be quite low."

Sarbacher, who died in 1986, made two important contributions to our knowledge. Firstly, he confirmed that there had been a briefing on crashed saucers at Wright-Patterson AFB, and secondly he revealed the name of Dr. Eric Walker as someone who attended the briefings: a first hand source of information. If Walker is of repute and can confirm his attendance at the military briefings regarding crashed saucers then it would appear that no further evidence is required to confirm the extraterrestrial connection. And he is of repute, and he has confirmed his attendance.

Walker was born in England in 1910 and died in 1995. He received his BS Degree in engineering in 1932, his MBA degree in 1933 and DSc degree in 1935 all from Harvard University in Cambridge, Massachusetts. His posts included Executive Secretary of the Research and Development Board, Chairman of the National Science Foundation's Committee for Engineering, Chairman of the Institute for Defence Analysis, and President of Pennsylvania State University. Walker was contacted by researcher William Steinman on 30th August 1987 and the following conversation took place (the transcript was made within 10 minutes of the call.)

Steinman: Hello ... this is William Steinman of Los Angeles, California. I am calling in reference to the meetings that you attended at Wright-Patterson Air Force Base in around 1949-1950, concerning the military recovery of Flying Saucers, and bodies of occupants. Dr Robert I. Sarbacher (now deceased) related this to me. You and Sarbacher were both consultants to DRB in 1950, you were secretary 1950-51.

Walker: Yes, I attended meetings concerning that subject matter; why do you want to know about that?

Steinman: I believe it is very important subject. After all, we are talking about the actual recovery of a flying saucer (spacecraft) not built or constructed on this earth! And furthermore, we are talking about bodies of the occupants from the craft who were analysed human-like beings not of this world!

Walker: So ... what's there to get excited about? Why all the concern?

Steinman: ... Did you ever hear of the "MJ-12 Group" and the "Project Majestic-12" which was classified as TOP SECRET/MAJIC? I have a copy of President elect D. D. Eisenhower's briefing paper on that project, dated November 18, 1952.

Walker: Yes, I know of MJ-12. I have known of them for 40 years ... you are delving into an area that you can do absolutely nothing about. So, why get involved with it or all concerned about it? Why can't you just leave it alone and drop it? Forget about it!! (11)