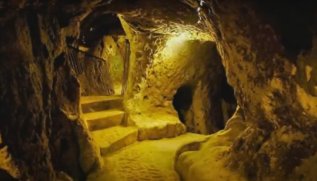 Their laboratory analysis found that the slabs that comprised the three linear features consisted merely of bedrock of local origin. Firstly, the shells and other grains that compose the slabs were found to be identical to the grains in the lose sediment underlying the slabs. Secondly, the carbonate cements that form the bedrock are typical of cements found in modern beachrock cements. Finally, the radiocarbon dates obtained from the slabs of beachrock ranged in age from 300 to 1200 BCE for the shoreward line of beachrock and a single date of about 4800 BCE for the seaward line of beachrock (24).

McKusick and Shinn (1980) obtained some oriented cores from one of the linear features. X-radiographs of seventeen oriented cores showed that the slope, particle size, dip direction, of the bedding is consistent from on block to another within two areas that they studied. If the blocks had been quarried from one site and then later laid out as a road, the original stratigraphy of the beachrock would not have been preserved. Clearly, these slabs represent beachrock that developed in situ along three shorelines. McKusick and Shinn also dated seven samples from the slabs and obtained dates ranging from about 750 to 1500 BCE The results of the scientific investigations onto the Road at Bimini conclude that the feature is not in fact man made, but beach rock that formed along the shore of North Bimini Island at three different shorelines during the Holocene era when the sea level was lower than present. Indeed, the lines themselves were not well founded or continuous enough to have served as any kind of road (25).

Despite this research, those wanting to find something mythical hung on, finally claiming that the formations must be man-made for they are unique. However, in fact, there are several places where rectangular slabs of bedrock are associated with carbonate beaches. These have been noted at Puerto Rico (26), Barbados (27) West shore of South Bimini (28) Joulter Cays, Bahamas (29) Heron Island, Australia (30) and Eastern Australia (31). 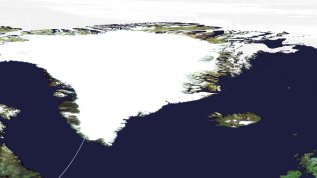 Greenland has also been suggested as the site of the lost continent. This north looking view of Greenland shows numerous indentations, fjords, that were carved by the glaciers of the last ice age. Even today, the ice in the centre of Greenland is 11,000 feet thick however the geological records shows that once Greenland enjoyed a temperate climate; only not during a period when man walked on the surface of the Earth - effectively ruling the island out as a potential location of the lost race.

It appears that there is, in fact, no evidence for any large lost colony on Earth. Taking this to its logical conclusion, some have suggested that we are looking the wrong place and rather than looking on the Earth, we should be looking inside the planet. Incredulous as it seems, such ideas did gain widespread support and will be mentioned here out of curiosity. There is certainly some evidence of subterranean activity. Peter Kolosimo in Timeless Earth writes of a tunnel system connecting Lima to Cuzco and from there onto the Bolivian border. "Apart from the lure of gain, these tunnels present a fascinating archaeo-logical problem.

Scholars agree that they were not constructed by the Incas themselves, who had used them but were ignorant of their origins. They are in fact so imposing that it does not seem absurd to conjecture, as some scientists have done, that they are the handiwork of an unknown race." (32) Harold T Wilkinsadvises of tunnels in the West Indies. "Similar strange tunnels of incredibly ancient date, and unknown origin, in the West Indies, were brought to the attention of Christopher Columbus when he visited Martinique." (34) There is also apparently a huge complex off underground passages and halls beneath the South American continent at Ecuador.

An Argentinean, Juan Moricz, claimed to be the legal owner of this strange underground world however, convinced of the incalculable cultural value of his find, he asked the State of Ecuador to take control and set up a scientific commission to study the area (35). Erich Von Daniken describes this vast system of caves in his book The Gold of the Gods and he details how Moricz guided him through the network, however Moricz claims this never happened. Indeed a report in the German Magazine Der Spiegel of March 1973 contains an admission from Von Daniken that he made this up (36).