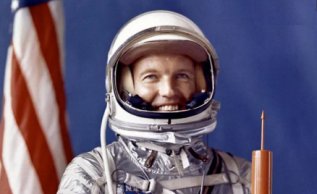 "It isn't just the US government which has kept quiet about alien visits. It would be arrogant of an American like myself to assume the ETs would only choose to visit my country. Indeed, I've heard convincing stories about governments all over the world that know of alien visits - including the British Government. There is a very real reason why governments have been so secretive: fear. Modern UFO sightings really began with the Roswell incident in 1947, when a crashed craft containing the corpses of several aliens was found in Roswell, New Mexico. Make no mistake, Roswell happened. I've seen secret files which show the government knew about it - but decided not to tell the public. There were very good security reasons for not informing the public about Roswell. Quite simply, we wouldn't have known how to deal with the technology of intelligent beings advanced enough to send a craft to Earth. The World would have panicked if we'd known aliens were visiting us. The question of whether or not aliens are still visiting us is more complex. If you are starting to think walking on the Moon addled my brain and that I'll believe any old crank theory about ETs, think again. I would describe myself as a cynic. I wasn't convinced about the existence of aliens until I started talking to the military old-timers who were there at the time of Roswell." (5)

In 1997 on British television, Mitchell had previously stated: "I have had talks with high level people whose duties, in the course of their duties, had the occasion to examine either material, reports or bodies, or have knowledge thereof that ... confirms the presence of ET on our planet and spacecraft and such technologies as they brought with them. 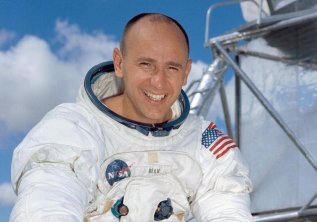 Astronaut Bean stated in 1996, "No one, certainly not me and Pete Conrad, who was with me the whole time, saw anything that suggested ancient civilisations. We wanted to see those things. We wanted to find something like that because it would be so wonderful to find it." Bean was referring to his mission with Pete Conrad, however explicitly excluded the third man on the mission Richard Gordon, who made the sighting of a 'bogey' on that same mission (13th September 1966) that was considered 'unexplained' by the Condon Report. Bean had spent over thirty hours on the lunar surface. Now a prolific artist, specialising in Moonscapes, he left NASA in 1981 to concentrate on his hobby. 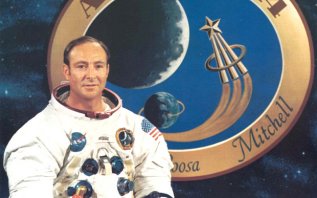 Ed Mitchell was born in Hereford Texas on 17th September 1930 and gained his Bachelor of Science in industrial management from the Carnegie Institute of Technology (now Carnegie-Mellon University.) He also holds a Bachelor of Science in Aeronautical Engineering from the US Naval Postgraduate School and a doctorate of science in aeronautics and astronautics from Massachusetts Institute of Technology. He became the sixth man to walk on the Moon making his descent during the Apollo 14 mission (31st January - 9th February 1971). He had a surprise for NASA officials on his return - the former US navy pilot admitted that he had conducted secret ESP experiments from space. Two years later he suddenly resigned from NASA and established the Institute of Noetic (from the Greek word 'nous' meaning 'kind') Sciences to study human consciousness. He revealed that whilst on the moon he had an "explosion of awareness". He claimed something was "different". In 1996 he stated "there seems to be more to the universe than random, chaotic purposeless movement of a collection of molecular particles. On the return trip, gazing through 240,000 miles of space towards the planet from which I had come, I suddenly experienced the universe as intelligent, loving, harmonious." 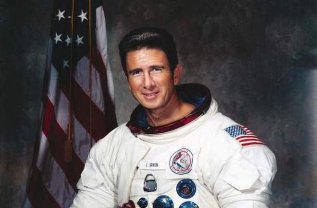 Although astronaut James B Irwin, the eighth man to walk on the moon, never made reference to any unusual sightings, he suffered both physically and mentally following his space missions. The astronaut concerned NASA on his return by stating that whilst on the lunar soil he felt "the presence of another power I'd never felt here on Earth ... seeing the Earth shrink to the size of a marble and everything you ever cared about is on that marble changes a person's mind ... It would appear, from my own investigations and the investigations of others, that since the days of Eisenhower and John F. Kennedy, that high level people in the US government and perhaps other governments have been systematically excluded from detailed knowledge of this because they had no need to know." (6)

Irwin became a born again Christian and within a year of his mission, resigned from NASA to take up work as a preacher. Irwin was the astronaut who had picked up the 4.2 billion-year-old rock, called the GGenesis rock'. It was this discovery that led him to later devote the rest of his life searching for biblical artefacts, such as the legendary Noah's Ark. During the next ten years, he led seven expeditions up Mount Ararat in Turkey, where he believed the Ark lay. He found nothing but later told journalists he had glimpsed a "dark, promising object" through mists on the 17,000ft peak.

He later researched ancient routes in Egypt and looked into the Ark of the Covenant mystery in Jordan. In the 1980s Irwin was asked why the moon landings had changed people. "It must be the contrast,". he replied, "the lifelessness of the Moon versus the place where life abounds." In August 1991, he suffered a heart attack and died aged 61.